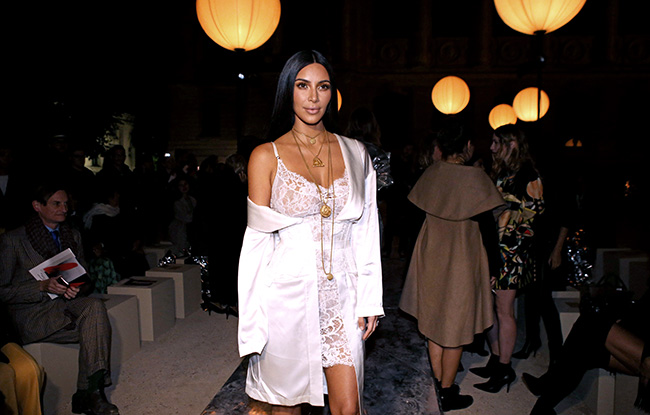 PARIS — Armed robbers held up Kim Kardashian at her Paris hotel on Sunday night and made off with several million dollars worth of jewelry, in an incident that risks further denting the overseas image of the French capital.

“Kim Kardashian West was held up at gunpoint inside her Paris hotel room this evening, by two armed masked men dressed as police officers. She is badly shaken but physically unharmed,” her spokeswoman said in a statement. She did not elaborate.

A spokesman for the Paris police prefecture said authorities are hunting five men involved in the attack and the matter has been referred to the Banditry Repression Brigade, a special unit of the French Interior Ministry. “Some jewelry was stolen,” he said, referring further inquiries to the Paris public prosecutor.

Kardashian, her head covered in a black blanket, was photographed boarding a private plane at Le Bourget airport near Paris in the early hours of Monday accompanied by her bodyguard Pascal Duvier and assistant Stephanie Sheppard. She arrived in France last Wednesday to attend Paris Fashion Week.

The five men broke into the building at around 2:30 a.m. and threatened the night watchman, said French newspaper Le Parisien, quoting unidentified sources. Three men stood watch as the other two pointed a gun at Kardashian, bound her hands and feet and locked her in the bathroom, it added.

The celebrity and entrepreneur was seen at the Givenchy show on Sunday evening wearing several gold necklaces from her husband Kanye West’s collaboration with Jacob Arabo, aka Jacob the Jeweler, unveiled at his Yeezy fashion show in New York last month.

She has also been wearing a Lorraine Schwartz ring featuring a 20-carat diamond, a recent gift from West. After the Balmain show on Thursday, Kardashian posted an image on Instagram showing her wearing the ring in addition to a Dolly Cohen diamond grill.

On Monday morning, three police officers guarded the Hôtel de Pourtalès, a historic building behind the Madeleine in Paris that houses the No Address hotel where Kardashian was staying. A discreet venue with no apparent entrance, it has previously hosted the likes of Leonardo DiCaprio, Madonna and Prince.

The building is home to Groupe Allard, the company run by businessman Alexandre Allard that also owns the Faith Connexion fashion brand. The group registered the No Address brand in 2010. Allard could not immediately be reached for comment.

A crowd of journalists had also gathered. Crime scene investigators were seen leaving the premises at around 10.30 a.m. CET.

Kardashian and West are regulars at Paris Fashion Week. In the last few days, she has taken in shows by Balmain, Off-White, Balenciaga and Givenchy and other events.

On Sunday night, Kim Kardashian, her sister Kourtney and mother Kris Jenner were on hand to watch younger sibling Kendall Jenner model in the Givenchy show. Later that night, Kim and Kourtney Kardashian attended a dinner at Azzedine Alaïa’s residence for Surface Magazine.

West was performing at the Meadows Festival in New York but abruptly ended his set, telling concertgoers he had a “family emergency.”

“Due to a family emergency, Kanye West was forced to end his performance towards the end of his set. We appreciate the great show he put on for fans to close out the inaugural Meadows Festival. Our thoughts are with West and his family,” organizers said in a statement on Twitter.

It was the second security scare for Kardashian at Paris Fashion Week after an incident last Wednesday in which serial prankster Vitalii Sediuk lunged at her as she arrived at a restaurant. Her security team rapidly mastered Sediuk.

Earlier on Sunday, Kardashian posted an image to her Twitter account showing her walking with Duvier behind her. “This guy is always in my shot!” she wrote alongside it. It was not clear if Kardashian’s bodyguards were present in her room at the time of the attack.

Kris Jenner addressed the family’s ongoing security concerns at the Givenchy show before the hotel robbery. “We always have a lot of security that most people don’t even see, you know, always around, so the minute that [Sediuk] approached Kim, our guys shut him down,” she explained.

“He does that to everyone, apparently, and it’s a shame that somebody thinks that sort of thing in this day and age is funny because, you know, your personal well-being is so important and you want to feel safe, especially in Paris, where there’s already been a lot of unrest,” she added.

She did not confirm whether Kardashian and West had taken out a restraining order or pressed charges against Sediuk, who had already targeted Kardashian at Paris Fashion Week two years ago. “I’m sure that they have done something, I’m not sure what it is yet,” Jenner said.

The event immediately took on political overtones. Nathalie Kosciusko-Morizet, a conservative politician who failed in her bid to become mayor of Paris in 2014, said it was disastrous for the city at a time when tourists are staying away due to the ongoing threat of terrorist attacks and repeated strikes.

“Our thoughts are with her because clearly, what happened to her is violent and traumatizing. But you also think of the image of Paris. This morning, on every news channel in the world, probably, and definitely in the United States, this news will be played in a loop,” she said on Europe 1 radio.

“Do you realize the negative publicity this represents?” the politician continued. “You can spend a lot of money on advertisements about ‘I Love Paris,’ the image of Paris, ‘Come to Paris,’ tourism. All these ads have now been brutally cancelled out by the Kim Kardashian affair,” she said.

In a statement, Paris mayor Anne Hidalgo called on politicians not to exploit the incident for electoral purposes.

“I condemn the assault on Kim Kardashian last night in her hotel. I support her and would like to assure her she will always be welcome in Paris. I fully trust the police, in the framework of the ongoing inquiry, to identify and rapidly catch those responsible,” she said.

“This very rare act, which took place in a private venue, in no way calls into question the work of the police and public security in Paris,” Hidalgo added, noting that Saturday’s White Night festival — when museums and other venues stayed open all night — drew more than 2 million participants and went off without incident.

“It is possible to visit the French capital and enjoy leisure time under safe conditions. As such, I call on politicians from the right and left alike to show responsibility in the run-up to presidential elections, a period that is sometimes rife for soundbites,” she said.

“At a complicated time for tourism, when boosting visitor numbers should be everyone’s priority, using this incident as food for controversy would be tantamount to directly harming the tourism sector and the 500,000 jobs it represents in the Ile-de-France region,” Hidalgo said.