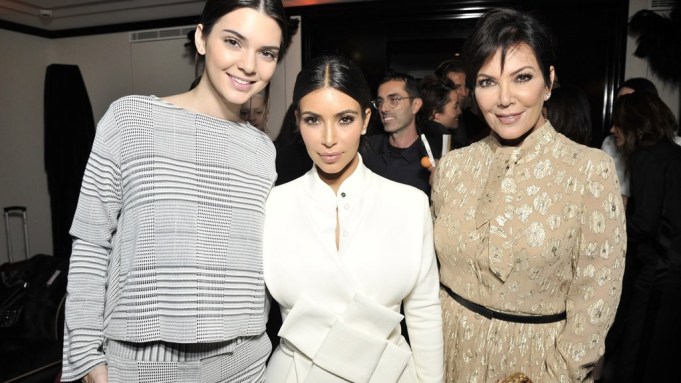 REALITY BITES: Russian designer Natalia Alaverdian made her entrée on the Paris fashion scene with a party on Wednesday night that involved a Kardashian family reunion, a stuffed tiger and lashings of caviar.

Kardashian brought along her husband Kanye West, mother Kris Jenner and sister Kendall Jenner, who is modeling in several Paris shows. The reality TV star had stopped off after the Balenciaga show to change into a short white A.W.A.K.E. dress with an obi belt, and revealed it was West who discovered the designer online.

“He researches everything and he loves to find new talent, and he introduced me to her and told me she’s part Armenian, and so am I,” she said. “I’m all about empowering other women to be successful and it’s really important to me to support designers that I believe in and friends that I believe in that are hardworking.”

Kardashian was in town with her baby daughter North, who attended the Balenciaga show wearing an extra-small “Yeezus” T-shirt featuring a drawing of a skeleton.

“You know, she was, like, crying when we were leaving, so we brought her instead – last-minute decision,” she explained. “I hope she likes fashion. Whatever she likes, I will support, but it seems like she does. She’s really into it, she just makes it so easy. She loves to dress up.”

The event was the first in a series planned by Duma as part of her online platform Buro 24/7’s new Fashion Forward Initiative supporting emerging designers. “For a young designer, it’s very hard to get through without a social event nowadays, unfortunately, and I think everyone understands that,” Alaverdian noted.

Now in its fifth season, A.W.A.K.E. — an acronym for All Wonderful Adventures Kindle Enthusiasm — is carried in stores including Browns in London, Tsvetnoy in Moscow and Opening Ceremony in New York and Los Angeles, and online on Moda Operandi and Luisa Via Roma, among others.

Having based previous collections on animals like a giraffe or a rooster, Alaverdian opted for a dragonfly theme for spring, including a print she designed herself. Formerly fashion director of Russian Harper’s Bazaar, she is also a photographer and shoots her own look books.

Vodianova said she had only recently discovered the label. “I’m all for more designers coming from Russia, kind of stepping out of their bubble and embracing the world. I think the success of Ulyana Sergeenko has given a lot of other Russian designers a hope that they can also make it,” the Russian model said.

For Kris Jenner, the party was just the first stop of a weeklong stay in Paris. The matriarch of the clan, who on Monday filed for divorce from Bruce Jenner, said she would start filming on season 10 of “Keeping Up with the Kardashians” on Oct. 6, in addition to releasing her cookbook “In the Kitchen with Kris” next month.

“Feeding somebody in your kitchen is like a gift of love, but it’s also making it beautiful and setting a great table,” she said. “I think that that’s the one thing that I’d like to pass down to my kids, it’s how special to make things for their families, because it’s always about making a memory at the same time.”