The multihyphenate is looking toward permanent retail and expanding Skims into men's and beyond as its first pop-up opens in L.A.

Kim Kardashian West is ambitious about the future of Skims.

Launched as a shapewear line in fall 2019, the brand just opened its first pop-up in Los Angeles. The temporary shop is located inside The Grove, the Rick Caruso-owned shopping center where Kardashian West, a native Angeleno, has been shopping since it opened in 2002. In partnership with Nordstrom, Skims’ first retail partner, the pop-up is a nude-colored box with rounded edges and a large brand logo. Outside of Nordstrom and now Selfridges in the U.K., the brand is sold only online.

“We obviously want new customers, all the way,” Kardashian West told WWD, as she was about to head over to see the pop-up open for business for the first time. “I love the idea that you can see this and not quite know what it is and just check it out.” The store opened Tuesday and will close May 7. 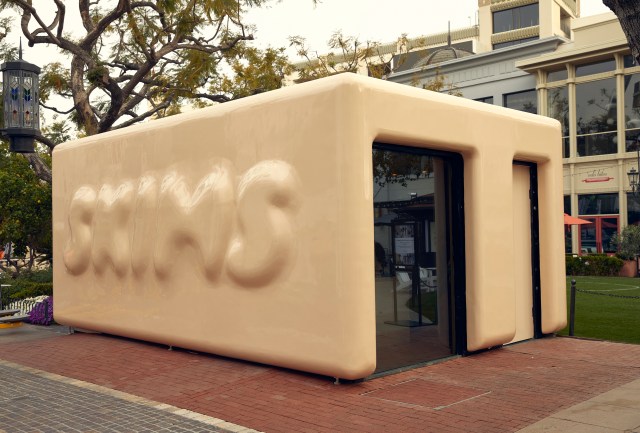 The first Skims pop-up at The Grove mall in L.A.  Courtesy

Her ambition for the brand certainly doesn’t end there. With the success of Skims this year, during the coronavirus pandemic, there is a lot more of it on the way.

A Skims representative declined to give specific sales figures, but Kardashian West said online sales “quadrupled” last year and she had to hire more employees, in large part due to the fortuitous planning of casual and loungewear extensions of the brand not long before the pandemic hit. She singled out the Skims Cozy line, made from a stretch bouclé yarn, as a major success.

“I knew it would do well because I’d never seen anything like it before, but we’ve restocked it 10 times now,” Kardashian West said. “We just keep adding different colors and we always sell out.”

Casualwear has become a focus as demand for comfortable stay-at-home clothing became so obvious.

“Lounge and casual was planned, it was coming out, maybe it would have been a smaller drop or less frequent but the pandemic hit and it was just selling out like crazy,” Kardashian West said.

So there will be more Cozy and more casual, for women and kids. There will be more lingerie and underwear, more bodysuits. But Skims will be expanding into new categories, too, like sport (“I want the most perfect leggings and sports bra”), swim and men’s. When Rihanna revealed last fall her men’s line of underwear for Savage x Fenty, it essentially went viral online and all of the items are currently sold out on Amazon.

“We have a huge request in the men’s category,” Kardashian West said, noting that the Skims Boyfriend line was a sort of “test” for that market. Most of the pieces have sold out.

Despite recently filing a trademark for Skkn by Kim, which covers products in the skin care, hair care, nail care and supplements categories, Kardashian West maintains that another brand or venture isn’t coming in the near term. The mogul already has beauty and fragrance lines under her KKW brand, in addition to Skims, and is continuing to study for a law degree.

“I want to finish that,” she said, “before I connect with something else.”