Her new lineup of Skims Solutionwear models is out and it includes real women — like former inmate Alice Marie Johnson.

“Look at the most amazing model ever @AliceMarieFree modeling for @Skims launching September 10!” Kardashian West tweeted Friday, with a video of Johnson in the Skims Sculpting Bodysuit.

Look at the most amazing model ever @AliceMarieFree Modeling for @skims launching September 10! pic.twitter.com/o7aO8YPJfa

Kardashian West found out about Johnson and her story by way of social media in 2017. The sixtysomething Tennessee woman had been sentenced to life in prison plus 25 years without the possibility of parole in 1996 on nonviolent drug charges.

According to a representative for Kardashian West, “Kim was moved to take action.” The reality star and entrepreneur even paid a trip to the Oval Office to ask President Trump to grant Johnson clemency. Johnson was freed on June 6, 2018. 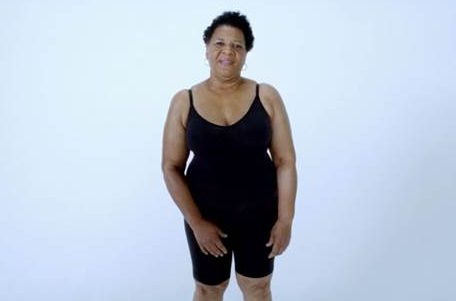 Skims Solutionwear features 26 women telling stories “about why they love their bodies and how Skims empowers them to feel the best version of themselves,” according to a statement.

At the time, she said she had been working on the “solution-focused approach to shape-enhancing undergarments” for 15 years and intended to name it “Kimono.”

But the name quickly caused a backlash on social media and within hours, the Internet exploded with accusations of cultural appropriation, since the brand’s planned name was the same as that of the traditional Japanese garment.

Kardashian apologized, promising to rename the line at a later date. On Monday she revealed the brand would be renamed Skims Solutionwear.

“My fans and followers are a huge inspiration to me — I’m always listening to their feedback and opinions, and am so grateful they shared their ideas for a new brand name,” Kardashian wrote on Twitter.

My fans and followers are a huge inspiration to me – I’m always listening to their feedback and opinions, and am so grateful they shared their ideas for a new brand name. After much thought and consideration, I’m excited to announce the launch of SKIMS Solutionwear™ pic.twitter.com/3bV5MwblDr

And the timing might be right. The buzz around shapewear — and things like bodysuits — continues to gain traction amid the casualization of fashion and consumers’ increasing desire for comfort.

A representative for Skims declined to give further details except that the pieces will be available in sizes XXS to 5XL at Skims.com.

“I didn’t even know who Kim Kardashian was,” said Johnson, who wrote a book about her incarceration that included a forward by Kardashian West. “She went to war for me, to fight for me. That’s why I call her my war angel.”