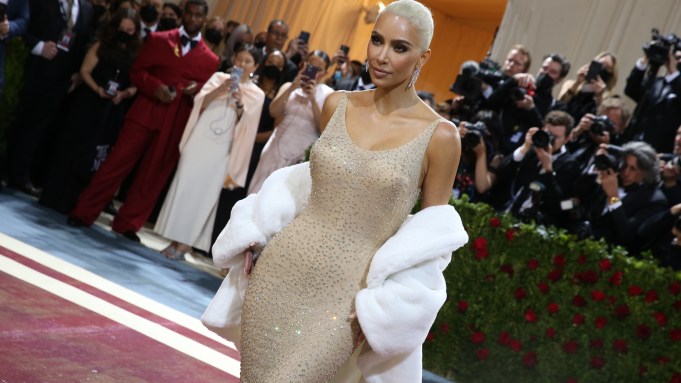 Kim Kardashian is addressing the allegations that she damaged Marilyn Monroe’s dress.

After rumors swirled in the last week about whether the reality star-turned-entrepreneur ruined the dress when she wore it at the 2022 Met Gala, Kardashian finally cleared the air — denying that she did.

“No. [Ripley’s and I] worked together so well,” she said on the “Today” show. “There were handlers in gloves that put it on me.”

Due to the historical significance of the dress, Kardashian only wore it for a few minutes, changing into it on arrival and up the stairs of the Met before changing into an exact replica to join the other guests inside so as to not damage the dress.

“It was such a process,” she continued. “I showed up to the red carpet in a robe and slippers, and I put the dress on the bottom of the carpet, went up the stairs — I probably had it on for three minutes, four minutes — and then I changed right at the top of the stairs.”

The dress, which was designed by costume designer Jean Louis based off a sketch by Bob Mackie, went viral last week after photos online surfaced showing the alleged damage after the Met Gala.

However, Ripley’s Believe It or Not! released their own statement saying that Kardashian did not ruin the dress.

“From the bottom of the Met steps, where Kim got into the dress, to the top where it was returned, the dress was in the same condition it started in,” Amanda Joiner, Ripley’s vice president of publishing and licensing, said in the statement. Joiner was continuously with the dress from the transport in Orlando to New York up until the day of the event.

Monroe wore the jeweled beige gown when she famously serenaded former President John F. Kennedy on his 45th birthday in 1962. Aside from Monroe, Kardashian is the only other person to have ever worn the dress. Ripley’s Believe It or Not! acquired the gown at a Julien’s Auctions event in 2016 and has been displaying the garment in Hollywood since Memorial Day.

The dress is valued at more than $10 million and features 6,000 hand-sewn crystals. The sketch was reportedly known to be one of Mackie’s first assignments, working as a sketch artist for Louis at the onset of his career.