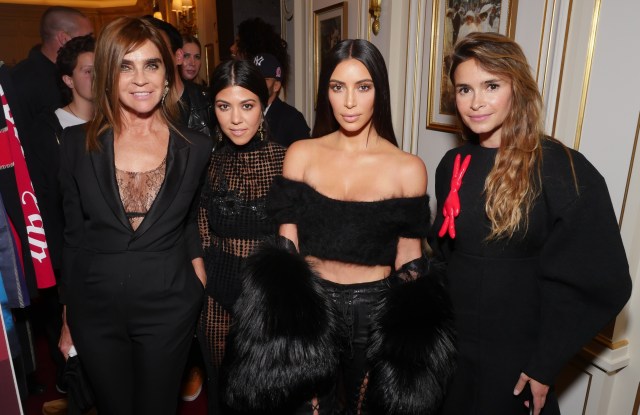 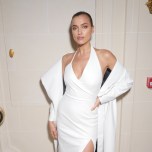 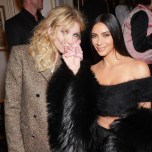 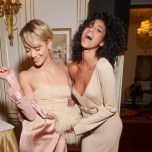 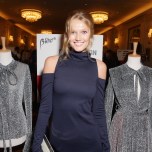 SOFT POWER: Russian designers moves into the spotlight on Friday at the cocktail reception of Miroslava Duma’s Buro 24/7’s Fashion Forward Initiative supporting emerging designers at the Ritz when Paris Fashion Week was in full swing. Kim and Kourtney Kardashian made a showing, further upping the glamor of the event whose cohosts included Carine Roitfeld, Irina Shayk and Natasha Poly.

The event was the third in a series planned by Duma. Farfetch joined the initiative this year for a capsule collection where the seven talents from Russia, Georgia and Ukraine selected were invited to create a piece inspired by constructivism. It’s set to go on sale in February via the online fashion retail platform and at its subsidiary Browns in London.

“One of the designers here is this Armenian-Russian designer,” Kim Kardashian told WWD, referring to Tigran Avetisyan. Duma had taken her through the designer’s display. Kardashian’s stay in Paris is continuing better than it began. After a prankster lunged at her on Wednesday, she took in the Balmain and Off-White shows on Thursday and she plans to spend the weekend in the City of Light. Meanwhile, model Jasmine Sanders was chatting with Kourtney Kardashian. “Girl talk,” Sanders said.

“I am half Russian. Everything that’s Russian moves me. There are many talents. I already ordered a skirt from one, a coat from another one,” said Roitfeld.

“It’s my home country. It’s really important to support young designers. And we’re so happy to have Carine here,” said Shayk, wearing a white leather gown with an oversize coat created by Alexander Terekhov. The Russian model plans to attend a L’Oréal Paris party on Sunday night. “Dress code is black and gold. It’s going to be a sexy and beautiful fun night,” she said.

Natalia Vodianova was in an Ulyana Sergeenko dress.

“We’re always interested in new talents, in bringing them to the region,” said Aisha Al Thani, executive director in charge of business development for the future Place Vendôme shopping mall in Qatar. The sprawling retail project boasting 602 shops is slated to open in 2018, she said.

Other labels presenting at the Buro 24/7 event included Djaba Diassamidze.