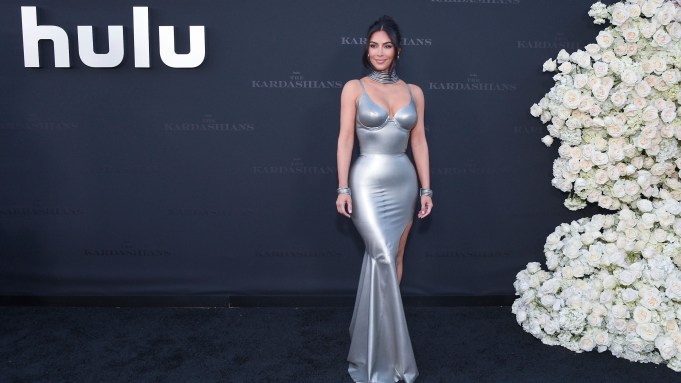 “The Kardashians” is almost here.

Kim Kardashian, Kourtney Kardashian, Khloé Kardashian, Kylie Jenner and their mother Kris Jenner attended the premiere of their anticipated new reality series on Hulu on Thursday night in Los Angeles in an array of standout looks. Appearing alongside them were Travis Barker, Corey Gamble, Reign Disick and True Thompson.

Kim Kardashian wore a custom silver latex gown by Thierry Mugler, created before the designer passed away in January. She styled her black hair in an updo and left two strands to frame her face. She finished the look off with silver bangle bracelets and a matching choker necklace.

The Skims founder reportedly arrived with her new boyfriend, comedian Pete Davidson, who wore a suit by Midnight Studios by Shane Gonzales, before they parted ways on the red carpet for her to walk solo. The event marked their first official public appearance together since they sparked romance rumors in November.

Kourtney Kardashian walked the red carpet hand-in-hand with her now-husband Barker, with both of them in their usual, head-to-toe all-black ensembles. The Poosh founder wore a black Valentino cape dress with a cutout design to show her midriff while the musician wore a black suit.

The two tied the knot earlier this week shortly after the 2022 Grammy Awards in Las Vegas. However, some sources reveal due to the absence of a marriage license, the two are not officially married yet.

Khloé Kardashian brought her daughter, True Thompson, and wore a form-fitting, nude corset silk dress, styling her blonde hair in curls and topping the look off with sunglasses. The three-year-old wore a minidress to match her mother and white Christian Dior high-top sneakers.

The family matriarch, Kris Jenner, brought her longtime boyfriend Gamble, with the two in coordinating pink looks. Jenner wore a bright pink loose-fitting gown by Valentino, which she paired with a matching purse and heels. Gamble wore a baby pink button-down under his black suit.

Kylie Jenner attended wearing a custom white latex dress by Coperni, inspired by the label’s fall 2022 collection. She topped off the look with custom white boots by Amina Muaddi, also wearing her hair in an updo with two strands framing her face.

The family’s new reality series, “The Kardashians,” will be available to stream on Hulu on April 14. Despite the family’s many ups and downs, it seems they are all returning to continue to give fans inside looks at their personal and professional lives.

Jenner and all of her daughters Kourtney, Kim and Khloé Kardashian and Kendall and Kylie Jenner are in the cast. Snippets of Kourtney Kardashian’s former partner Scott Disick as well as Barker are featured in the trailer.

The family shocked their fans when they revealed in 2020 that their long-running hit E! series “Keeping Up With the Kardashians” was ending after 20 seasons. The show had become one of the most popular reality television shows since it first aired in 2007.

In December 2020, Hulu revealed it signed a multiyear deal with the Kardashians for the family to create exclusive content for the streaming service. At the time, the company said the show’s expected debut was to be late 2021.

Everything to Know About Hulu’s ‘The Kardashians’ Show

‘Keeping Up With the Kardashians’: The Family Then and Now