The London-based designer has reimagined the costumes for a production of “The Rite of Spring.” 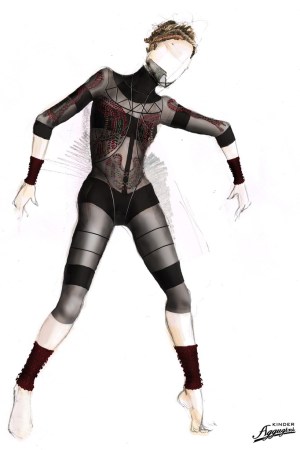 KINDER ON STAGE: London-based designer Kinder Aggugini has reimagined the costumes for an English National Ballet production of “The Rite of Spring,” the mold-breaking Ballets Russes composition that premiered in Paris in 1913. Aggugini has designed costumes that include a graphic striped black bodysuit for the ballet, a version of the late choreographer Kenneth MacMillan’s 1962 interpretation of the work, which the ENB described as “visceral and energetic.” The original 1913 version of the ballet — which depicts a young girl being offered as a sacrifice to the god of spring — was a collaboration between figures including composer Igor Stravinsky, choreographer and dancer Vaslav Nijinsky and the Ballets Russes’ Sergei Diaghilev.

Aggugini said of the commission: “The guidelines for ballet costumes are quite strict, so on top of an appearance, one has to consider functionality and durability,” he said. “I guess it’s a bit like designing a Batman outfit, but in this case there was also a clear vision from one of the most revered British choreographers.…This is what makes the project so special — it’s not just a costume, it’s the resurgence of an iconic work of art.”

This story first appeared in the January 4, 2012 issue of WWD. Subscribe Today.

The ballet will be shown from March 22 through March 27 at the London Coliseum, as part of the ENB’s program “Beyond Ballets Russes,” which will also spotlight reinterpretations of the ballets “The Firebird” and “Apollo.”