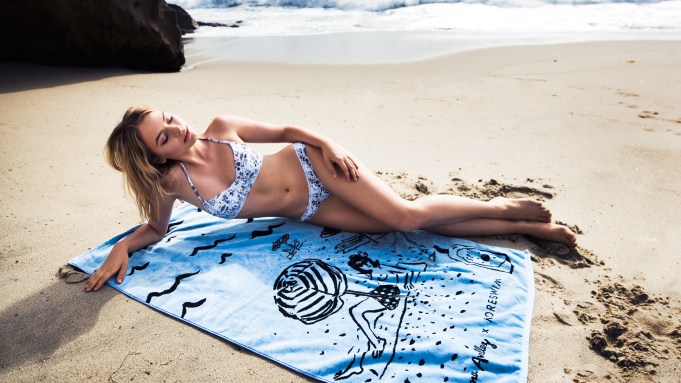 ITALIAN SUMMER: Jessica Schulz, cofounder and designer of Kore Swim, met New York-based illustrator Joana Avillez during their undergrad studies together at the Rhode Island School of Design. In the summer after their freshman year, the two friends participated in a study abroad program that took them to Italy. “We had to bring our sketchbooks with us everywhere and [Joana] always had the coolest, most entertaining drawings of our Italian adventures,” said Schulz. She had always wanted to collaborate with Avillez on a project, and her swimwear label, launched in 2011 with sister and head of business operations Nicole McClay, provided the right opportunity.

Inspired by their summer together in Italy, Schulz and Avillez worked to conceive a theme for a print that evoked “the hot, care-free days of an Italian summer,” according to Schulz. “I knew Joana would come up with something unique and totally amusing that I would love.” Avillez’s hand-drawn illustrations feature beach scenes and colorful florals. Launching in May on Shopbop.com and Kore Swim’s e-commerce site, the capsule includes three styles ranging from $216 to $262 as well as a canvas tote bag and a velour towel. It’s the label’s first artist collaboration.

In addition to contributing her work to publications including Vanity Fair and The New York Times, Avillez also illustrated Lena Dunham’s recent book, “Not That Kind of Girl,” and dabbled in clothing previously with a custom print created for Rachel Antonoff. (Readers may also recall Avillez’s quirky fashion week sketchbook created for WWD last September.)

But Avillez said working on the swim collection felt like a more personal project. “I always have a hard time with bathing suits; you’re sort of trying to figure out the best case scenario for all your insecurities — unless of course you have none,” she said. “I always wish I could be nine years old again, when a bathing suit was actually freeing and let me be active.” The collection’s maillot — a one-piece halter suit with cut-out detailing — should make that easy.