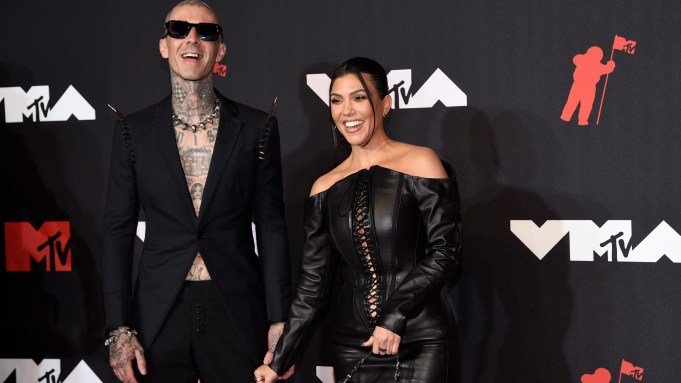 Congratulations are in order for Kourtney Kardashian and Travis Barker who recently got married over the weekend.

The two tied the knot at the famous One Love Wedding Chapel in Las Vegas, shortly after the 2022 Grammy Awards, where Barker performed with H.E.R. and Lenny Kravitz. The surprise ceremony reportedly took place close to 2 a.m. on Monday morning and was officiated by an Elvis Presley impersonator.

On Wednesday, Kardashian addressed their union by uploading a series of images on her official Instagram. When the news broke earlier this week that the two were not actually legally married yet due to the absence of their marriage license, the Poosh founder also addressed it in her caption.

“Once upon a time in a land far, far away (Las Vegas) at 2am, after an epic night and a little tequila, a queen and her handsome king ventured out to the only open chapel with an Elvis and got married (with no license),” she captioned the post. “Practice makes perfect.”

The couple started dating in January 2021 after being friends for years, according to People. Later that year in October, Barker proposed to her at a beachside hotel in Montecito, Calif.

In an Instagram post after the engagement, the Poosh founder uploaded two photos of herself and Barker embracing on the beach surrounded by endless roses and candles with the caption “forever,” tagging her now-fiancé’s account. The drummer reportedly popped the question at a beachside hotel in Montecito, Calif.

In the beginning, the two kept their romance mostly under wraps. Kardashian confirmed the relationship when she uploaded a belated Valentine’s Day post of an up-close shot of her holding Barker’s hand in February 2021.

Throughout their relationship since, the duo have never shied away from their affection for one another. Similar to Megan Fox and Machine Gun Kelly, Kardashian and Barker found ways to complement each other’s styles and personalities well in different iterations of all-black couple outfits.

The two finally made their red carpet debut at the MTV Video Music Awards in September, where both appeared in all-black ensembles and snapped photos touching tongues alongside Fox and Machine Gun Kelly.

Click through the gallery above to see photos of Kardashian and Barker’s style throughout their relationship.