Bulgari, Porsche, Kans cut short Wu's endorsement, while others like Master Kong, and Tencent's King of Glory have backed away from the star.

Louis Vuitton Friday has formally terminated Chinese Canadian singer-actor Kris Wu’s endorsement deal after the police investigation showed that some of the predatory claims turned out to be true.

Earlier this week, several brands, including Bulgari and Porsche, have cut ties with Wu as controversial claims surrounding his personal life emerged on Chinese social media over the weekend. A young woman who said she’d dated the pop star accused him of targeting young and sometimes underage females for sex, allegations Wu denied.

The Shanghai-based beauty brand Kans, owned by C-beauty giant Chicmax, was the first to react and announced Sunday evening it has terminated Wu’s endorsement contract on Weibo. It was followed by Liby, Tempo, Vatti, Master Kong, Tuborg Brewery and Tencent cutting ties with the celebrity on Monday.

Porsche, Master Kong Iced Tea, Vatti and King of Glory deleted all Weibo posts mentioning Wu by Sunday. Louis Vuitton temporarily hid all his posts on Weibo but made them public again shortly. 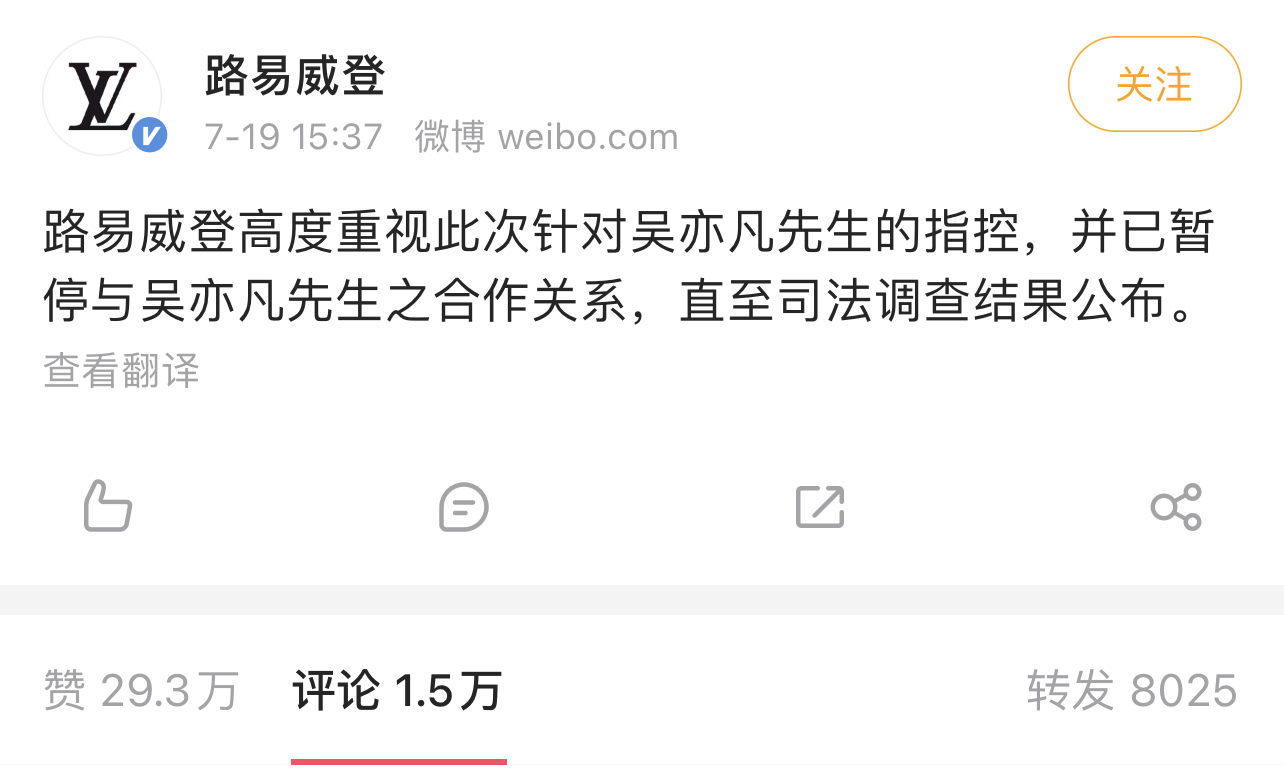 Louis Vuitton on Monday evening said it has suspended its relationship with Kris Wu until the outcome of the judicial investigation is known, on Weibo.  Weibo/Screenshot

Louis Vuitton Monday evening issued a brief statement on Weibo, saying that the brand “takes the allegations against Kris Wu very seriously and has suspended its relationship with Kris Wu until the outcome of the judicial investigation is known.”

Porsche and Bulgari also both said on Weibo they have decided to terminate their partnership with Kris Wu, effective immediately.

Wu, a former member of the South Korean boy group EXO, was first accused of infidelity and preying on underaged girls on July 8 by Du Meizhu, a 19-year-old college student.

She shared screenshots of alleged conversations between Wu and underaged girls on Weibo and claimed that she has struggled with mental health, and even had suicidal thoughts due to his infidelity and cyberbullying from his fans.

Du alleged that Wu kept a special WeChat account to contact underage girls under the pretense of recruiting artists or casting female leads for his music videos, eventually luring the girls into playing drinking games. Du said she was just one of his many conquests.

Wu and his team categorically denied the accusations and announced they had filed a defamation lawsuit against Du the same day.

However, over the weekend, Du revealed that she didn’t receive a court summons. Instead, she shared that Wu’s team reached out to her and proposed to settle the accusations with money. She posted a chat history of her negotiating the details of the settlement plan with Wu’s representative and a copy of the contract that his team offered her to sign, which she claimed to be a trap.

She later shared a video of her receiving two bank transfers totaling 500,000 renminbi from Wu Stacy Yu and Wu Yi Fan, which appeared to be Kris Wu’s mother’s name and his name in Chinese pinyin spelling.

In an interview with local press published on Sunday, Du said she had returned Wu the hush money in installments and was ready to face legal action. She also claimed that more than 30 women who shared similar experiences with Wu had reached out to her, two of which are minors.

Wu then took to Weibo to address the issue more in depth, saying:

“I didn’t respond earlier because I did not want to disrupt the legal process but I didn’t imagine that my silence would accelerate this rumormonger, I cannot stand it any longer. I have only met this woman once on Dec. 5, 2020 while with a group of friends. I didn’t urge anyone to drink, did not take a phone number, moreover did not do any of the details she described. That day there were many people present that can be witness. I am very sorry it’s disturbed everyone. I declare I have never done any “selecting of concubines”! No luring for sex! No drugging to rape! No underage! If there was this behavior, everyone rest assured I would go to jail willingly. I fully understand the legal weight of my words above.”

According to a statement from police in Beijing released Thursday, Wu’s agent did ask Du to go to the home of Wu on December 5 on the pretext of selecting her to appear in a music video. More than 10 people played games and drank at his home that evening.

Wu and Du had sex that night, and Wu transferred 32,000 yuan, or $4,950, to Du for online shopping on December 8, according to the police statement. The two stayed in touch on WeChat until April 2021.

The police investigation directly contradicted the statement Wu released about Du’s allegations on Weibo, and Louis Vuitton shortly announced it has now terminated its relationship with Wu.