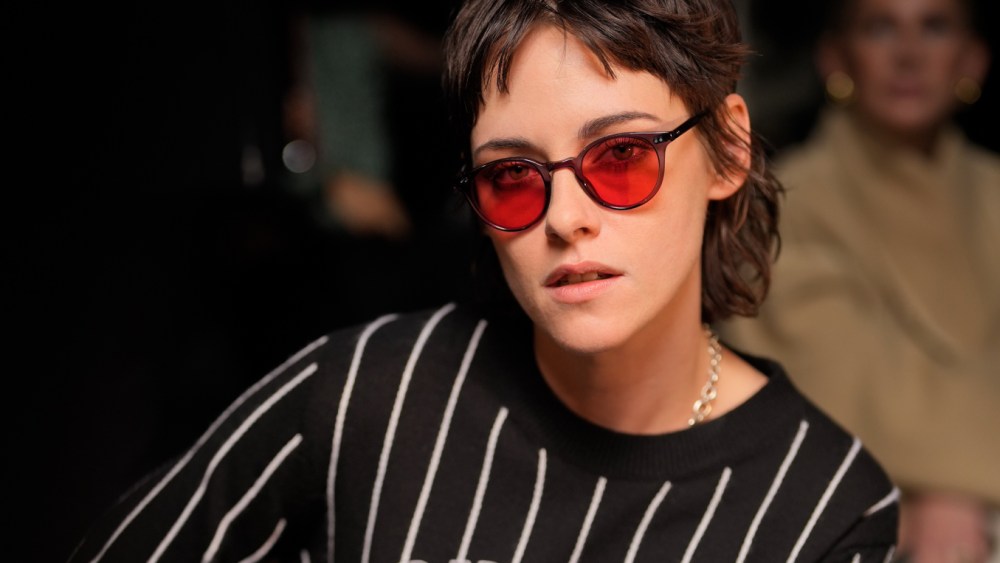 Kristen Stewart has been working on her first screenplay and teased a little of her writing prowess at the Chanel show. The show opened with a short film starring Stewart as herself, with voiceover lines, including: “It’s important to burn down your best yesterday, every day, so you can start again.”

“I wrote them,” Stewart said after the show. “I’m such a better writer than I am a candid speaker. I mean, I can at least get close to expressing myself when I have a minute alone.”

The actress said it reflects her philosophy on constantly challenging herself, and that’s in line with the current cultural climate.

“We’re all now allowed to morph daily and evolve, and I think it’s really important, not to necessarily burn it down, but to never feel like you’ve landed or to be so proud of some fixed notion because every day the world changes,” she said.

The film, directed by Inez and Vinoodh, is a bit of a play on paparazzi and living life in the spotlight, as photographers stalk Stewart as she’s leaving a restaurant. In it she also says the world is “highly pressurized” and moving so fast it gives her “whiplash.”

“You’re not always going to be on the forefront of change in progress, because you get f–king old,” said the 32-year-old. She said while it’s hard to define yourself, particularly in the era of social media and ever-changing mores, if you don’t do it yourself, someone else will do it for you. “And that’s painful. That kind of ruins lives,” she said of the tabloid culture.

The former child star reflected on growing up in the 2000s when the media treated young female stars harshly and expected a hyperfemininity. “It was a really rough, rough time for women, so judgmental, and unbelievably rigid, in terms of what we were allowed to be. Now it just feels sprawlingly free.” She said that while she did grow up on camera in that era, she’s never had social media, which gives her an ability to distance herself from the buzz constantly swirling around her.

To that end, the star attended the show with her fiancée Dylan Meyer and sported a new short pixie mullet.

“When I was little, people would be like, ‘Oh, you look like a boy.’ Nobody would say that any more … we’re cracking open words in certain ways that to me feels like liberation,” she added.

Gracie Abrams, fresh off a tour with Olivia Rodrigo and prepping to release her next single on Friday, reflected on Stewart’s film as a 23-year-old budding pop star.

“Life gives me whiplash 100 percent. I thought that was so true,” she said. “I’m trying to stay present as much as I possibly can right now. For an anxious person it takes a lot of practice, but I’ve gotten better at it recently and it’s improved my quality of life tenfold.”

She said mediation, therapy and “writing music is my number-one tool to stay sane.” She listens to Nina Simone and Joni Mitchell as inspirations. “As a writer, I’m lucky to be living in a time where women are as vocal as we are, and so I’m kind of trying to stay quiet and listen to everybody else’s voices.”

Abrams will celebrate the release in Paris before heading home to L.A. and continue work on a new album due out next year.

A very tired Jennie, fresh off of global promotions for Blackpink’s latest album, was tucked away on a white couch backstage and admitted to a little bit of jet lag on a 36-hour trip to Paris. The pop star, who has her first acting role in the upcoming HBO series “The Idol,” said she was “mesmerized” by the film screen that surrounded the room.

Stewart’s film was overlaid with scenes from Alain Resnais’ “Last Year in Marienbad,” projected larger-than-life on a screen that enveloped the runway.

“Kristen was sitting right next to me, so it felt like more of an unreal situation for me,” she said of her place in the front row next to the star.

She was sporting a cozy Chanel minidress and wrapped in a long sweater. So does she like to be more dressed up or relaxed in her personal style? “I like to be versatile, but mostly relaxed because I’m tired.”

“I think everybody would find flying too much hard … but I’m always lucky to be in Paris,” she said of her hectic travel schedule. “Fashion week is all about inspirations for me. I try to take every angle into my eyes as much as I can, because what I do at home isn’t pinpointed at one thing. We’re all about creating a visual that goes with the song and what I wear, everything has to harmonize.” That includes lots of use of color and layering, she said.

“The movie was really beautiful to see how someone really well-dressed can be worn in the metro. It was good with the theme ‘allure’ — it means moving forward — but I would not dare,” joked actress Rebecca Marder of replicating Stewart’s scene on the train in real life. “But it was a really graceful moment.”

Marder just completed “Madeleine,” co-starring Isabelle Huppert, from director Francois Ozon. She plays a lawyer in the 1930s-set comedy. “He goes really fast and as an actor you never get bored, so I was impressed how he directs it like a theater director. You never stop acting so you are really in the era.”

Reading the room, actress Jenna Coleman said she found the transformational message of the film “liberating and powerful.”

She just wrapped the series “Wilderness,” which shot partly in the Grand Canyon. She said the character, who is seeking revenge, “is a very different tone for me” which might surprise some fans of the period drama “Victoria.”

“You always retain a core, but what’s so interesting is that you often battle between, you know, you play a version of a certain part, and then people often want you to just be that person,” she said of living in the public eye. “I think that’s often one of the challenges. So it’s a really powerful message to do that from the inside out.”