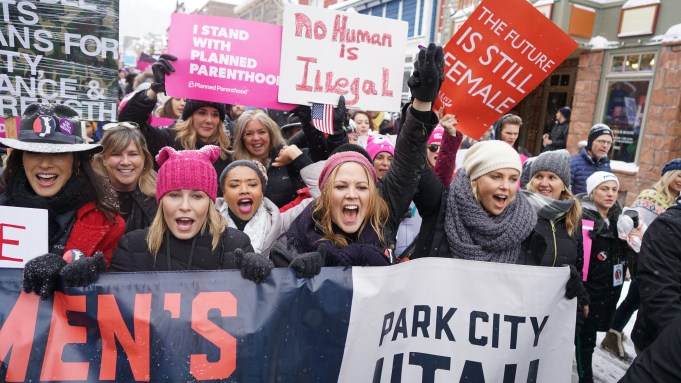 “We stay away from politics,” Sundance Film Festival founder Robert Redford recently told journalists during a press conference in Park City, UT. Maybe so, but that didn’t stop stars like Kristen Stewart, Charlize Theron, John Legend, Laura Dern, Maria Bello, Joshua Jackson, Connie Britton, Jurnee Smollett, Laura Prepon, Benjamin Bratt and approximately 8,000 other people from turning out at the Women’s March on Main which was held on Saturday morning in the snowy Old Town Park City in conjunction with the Women’s March on Washington, D.C. and other cities around the country.

Comedian Chelsea Handler, a member of the event organizing committee, led the march, which began in the Wasatch Brew Pub parking lot and ended a few blocks away with a rally in the Flagpole parking lot.

“Do we have to go around that way?” Theron asked an event organizer while finding her way.

When asked why it was important to her to attend, Stewart let the “I Stand with Planned Parenthood” sign she was holding do the talking for her. “Oh no, I’m not doing interviews right now, but it’s nice to see you,” she said.

Comedian Chelsea Handler, a member of the event organizing committee, led the march, which began in the Wasatch Brew Pub parking lot and ended a few blocks away with a rally in the Flagpole parking lot.

“Today, we are all standing together in solidarity alongside our sisters and our brothers who are marching in Washington, Chicago, Los Angeles and hundreds of cities around the world and seven continents,” Handler said.

“I’ve just gotten out of bed for the first time in 74 days. Only two things roused me from my depression and hopelessness I felt on November 8th: Meryl Streep’s speech at the Golden Globes, and this March here at Sundance today,” said Bello. “Yesterday, I don’t know about you, but I wept during the inauguration. And then I got angry and I realized that I’d stayed in bed for too long.”

Fittingly, event organizers handed out “I’m with Meryl” stickers to the crowd, who didn’t seem to mind the snow coming down around them.

“Before anyone criticizes us for having a March at Sundance and for only walking four blocks,” added McCormack, “Keep in mind we are at 7,000 feet. That’s like walking 12 blocks in Washington.”