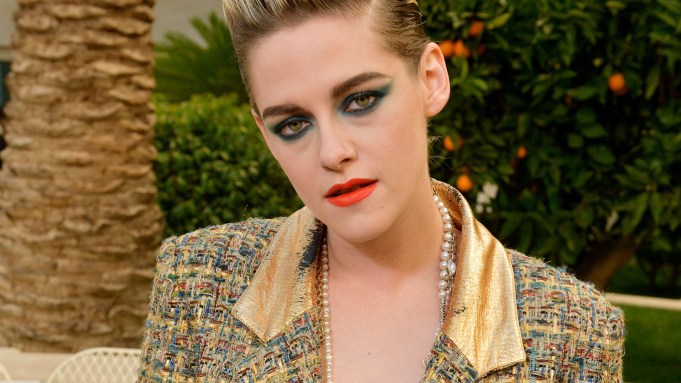 SNOW BUSINESS: “Imagine getting married in that, it is the most baller move. That is a real power move; you’re stating your stance right off the bat: This is the woman who you’re marrying, just so you know,” said Kristen Stewart after taking in the sparkly silver bathing suit-clad Chanel bride at the house’s couture show on Tuesday in the Grand Palais. With a blizzard under way outside, and Paris covered in snow, the palm tree-lined set was based on the gardens and swimming pool of an Italian villa.

The actress shared an anecdote from filming the “Charlie’s Angels” reboot due out this fall.

“There’s a synchronized dance, slightly disco-y but a little faster. The other girls [Naomi Scott and Ella Balinska] were much better than me at it, but I gave it my all,” said the actress, who confessed she has never watched any of the original TV series, which was filmed before she was born.

On the experience of being directed by Elizabeth Banks, Stewart said she felt in “trustworthy hands.”

“The movie is grounded but also funny and cute, and I was really intimidated by the idea of doing comedy with her because I find her really funny. I would literally ask her for line readings, I’d be like, ‘How would you do it?’” she said. “Also that I could mess up and be sprawling, and she would always be there to catch me.”

Sofia Coppola, who said the 18th-century-inspired collection — “especially the pink dresses at the end” — reminded her of “Marie Antoinette,” said the bride’s look was “a fun surprise.” “I was impressed by her, it’s cold in here and she was very graceful,” said the director, who is preparing to shoot her next film, which she penned, this spring in New York. But she declined to dish details.

“Swimming Pool” star Ludivine Sagnier felt right at home. “It’s like a Provençal villa, it feels like being somewhere in my country in the summertime, I almost forgot that it’s minus five [degrees Celsius] outside,” said the actress, who is filming the second season of “The Young Pope.” “It’s called ‘The New Pope,’ because there’s a new one, apparently, but I’m not supposed to say anything,” she said, adding that Jude Law, who played the lead in “The Young Pope,” “will still be around.”

Chanel show first-timer Tessa Thompson was still taking it all in. “First of all, the snow is gorgeous, and then to come into this space, you suddenly feel warm, even though it’s still quite cold in here. But it really is transformative,” the actress said. Thompson recently wrapped filming the newest installment of “Men in Black” and in April she has a film she produced coming out, a female-centric “modern Western” titled “Little Woods,” costarring Lily James, and helmed by first-time director Nia DaCosta, who is “fantastically talented and is doing Jordan Peele’s next film [‘Candyman’] now.”

Thompson shared a personal message for Karl Lagerfeld, who was unable to attend the show. “I hope he gets well, take the rest that you need. I mean, this is such an incredible feat, it makes sense to me that sometimes you just need to stay in bed after,” she said.

French actress Marion Cotillard, too, sent her best wishes to the designer. “I hope he gets well soon, he’s a rock.”