The L.A. designer is bringing her Cali-Paris style to the American heartland.

Los Angeles designer Clare Vivier is bringing her signature Cali-Paris style to the American heartland, with a new store now open at the Dairy Block in Denver and a pop-up opening today in the Lincoln Park neighborhood of Chicago.

“We’re excited about Chicago…we’ve designed the store with [events planner and interiors stylist] Amy Blessing and her sister Sarah, who have worked a lot with Goop. It’s furnished with both vintage and new pieces from local furniture shops, which can be purchased,” said Vivier, who started her brand in 2007 combining a love of French chic and American prep with the search for the perfect, non-corporate-looking work bag. “Denver, I was so impressed with when I visited. It was so bustling, everyone was out and about, and there are lots of places to eat and hang around the new Free Market in the Dairy Block.”

The two stores bring the boutique count to nine for Vivier, who is headquartered in the up-and-coming, L.A. River-adjacent Frogtown neighborhood of L.A., surrounded by newly opened production offices, photography studios and hipster coffee spots, which means it’s not unusual for people to pop-in unannounced to say hello, like Academy Award-winning costume designer Colleen Atwood, who came in while this reporter was visiting. 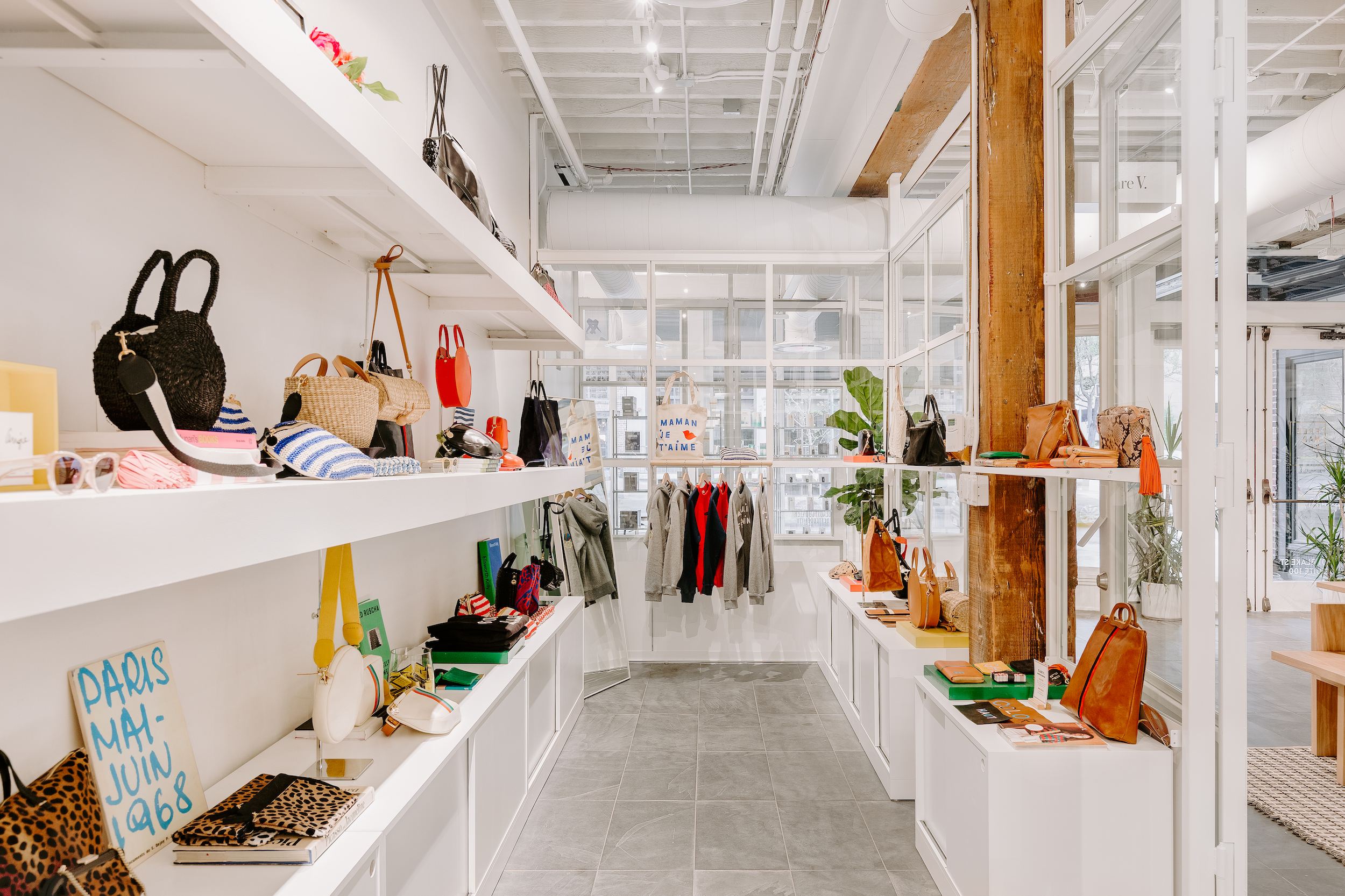 “There is a real creative zeitgeist,” Vivier said of L.A., where all her manufacturing is done in five local factories, save for work on her straw bags, which is done in Peru. “But the greatest thing is we all have our own space so we can not be affected by each other but support each other and appreciate the different things making us all tick.”

Vivier launched in 2007 with a single vegetable-tanned leather tote called La Tropezienne that became the go-to day bag for many young West Coast women. In 2012, she partnered with Dallas-based Bedrock Manufacturing to help grow the company, which today employs 70 people, internationally through online, wholesale and brick-and-mortar retail. 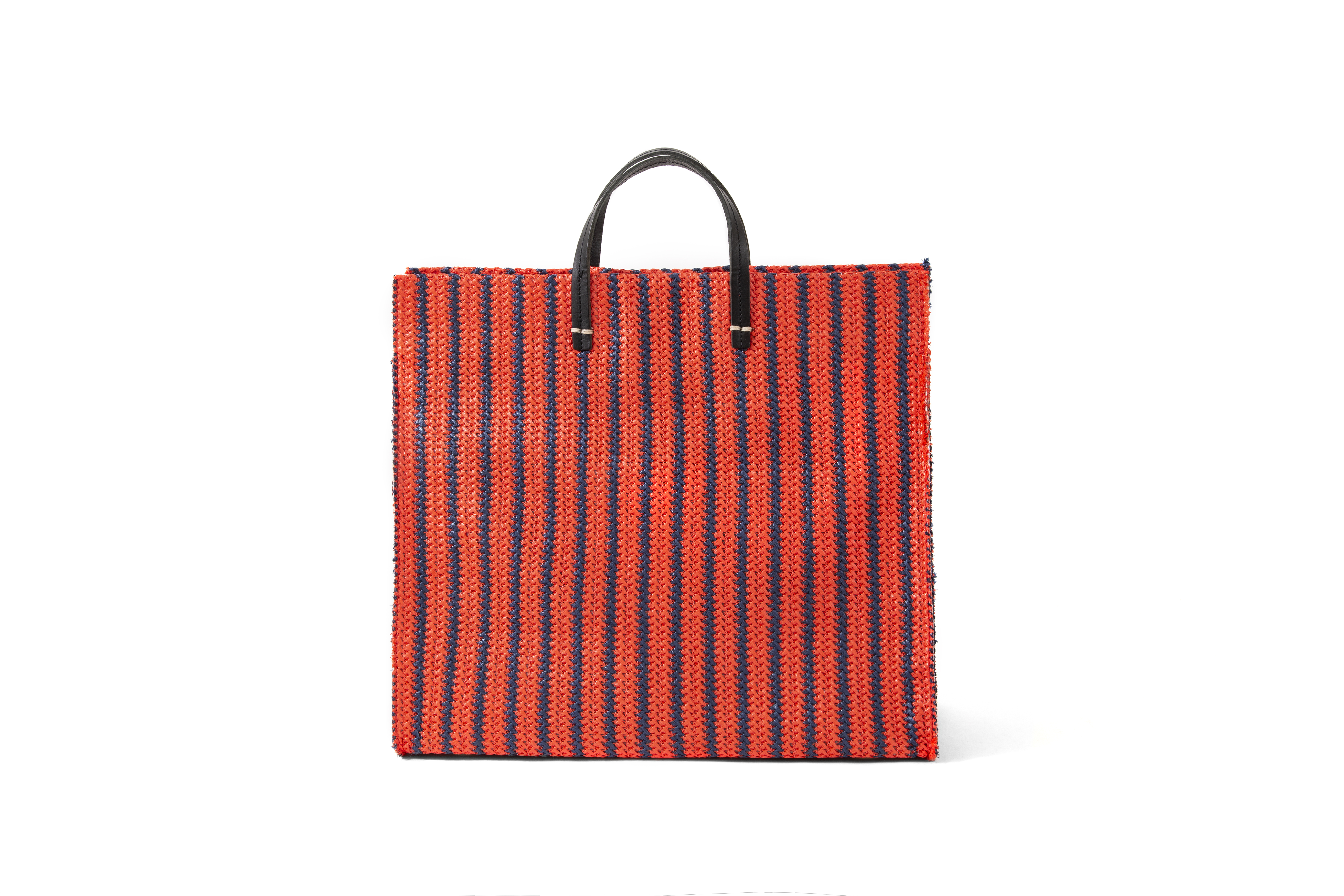 Early to fashion’s feminist moment, Vivier began collaborating with social justice organizations back in 2015, starting with Every Mother Counts. Alongside her accessories, she offers T-shirts, sweatshirts and scarves, some with French phrases — the designer’s husband is French — such as “Maman Je T’aime” and “Liberté, Égalité, Maternité,” with 100 percent of the net proceeds going to the organization. She’s also donated proceeds through other product design to Everytown for Gun Safety, Planned Parenthood, the ACLU, and others, and doesn’t hold back expressing from her political opinions on social media.

“The desire to support local communities and work toward promoting social justice was instilled in me from an early age by my parents,” explained the Minnesota native, whose father was a lawyer who did pro bono work on behalf of Mexican-American laborers in the Twin Cities, a cause that has inspired Vivier to keep her production local. “It’s important to me to remember that none of us exist in a vacuum. My work is about bringing joy to people by creating lovely products, and also supporting the causes that matter most to us.”

For 2019, she’s focused on growing awareness between the coasts, with the Denver and Chicago stores, as well as through trunk shows hosted with tastemakers in Washington, D.C., Minneapolis, Seattle and other cities where there is a hunger for L.A. style. “People are excited to come and have a fashion event in their town, and it shows how much potential we have for growth in these new markets,” the designer said.

Loved by Karlie Kloss, Laura Dern, Katie Holmes, Jessica Alba, Rashida Jones and more, the brand’s minimalist but warm accessories, including flat leather pouches, totes, backpacks and fanny packs, priced mostly under $600, have helped define a new segment in the market, paving the way for other similarly priced anti-“It” bag brands such as Mansur Gavriel, Wandler, Cult Gaia and Staud, which is headquartered just 10 minutes away, depending on L.A. traffic.

“I think it must be a good sign of where we’re at as a culture, and the rising consciousness of wanting something special that’s not at an outrageous price,” Vivier said of the friendly competition. “And we have a lot of great brands in L.A. doing it.”