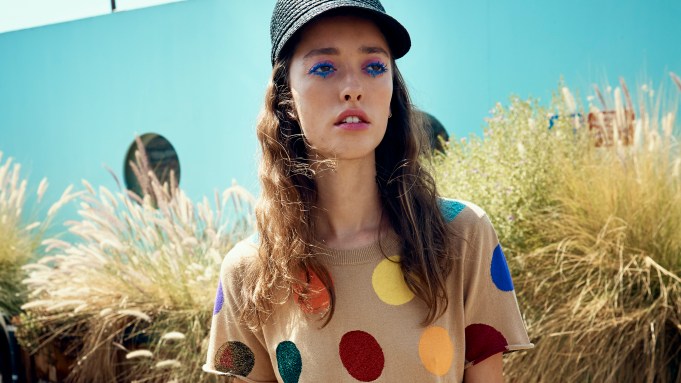 As nostalgia continues to drive designers to mine their pasts for inspiration, L.A.-based knitwear label Replica Los Angeles is gaining traction in the market for its throwback motifs. Angeleno Nathalie Saphier, who spent 15 years in Paris designing for Sonia Rykiel, Christophe Lemaire, Eric Bergère, Gaspard Yurkievich and Isabel Marant, decided to venture out on her own after another decade of styling for magazines and celebrities such as Amber Heard and Serena Williams and consulting for L.A. brands ranging from Lucky Brand to Equipment, A.L.C. and Raquel Allegra.

“When I lived in Paris, I was constantly trying to piece together looks based on my youth—I grew up on David Bowie and punk rock, and designers like Terry de Havilland and Peter Max have always been big inspirations,” Saphier said. “Replica has become a billboard for all the things that shaped me in the Seventies, Eighties and Nineties. I’m replicating in a way, my ideal wardrobe when I was a teenager.”

As megabrands such as Gucci popularize logo and graphic knits, Saphier decided to pay homage to Bowie, Iggy Pop and Pop Art at a more accessible price point—$180 to $500 retail for cashmere and cotton blends. “I’m not a knitwear expert, I’ve always designed full collections but there’s something about the simplicity of one category that appeals. Within that, there’s a lot of technical aspects I had to learn,” she said.

While she currently works with Apiece Apart and Jeannine Braden’s year-old line Le Superbe, Replica, she said, is a labor of love. This year, she partnered with apparel veteran Chana Taft Schuman, who serves as president of the company. Distribution has grown to include Neiman Marcus, Ron Herman, Revolve and Shopbop, with the recent addition of Rent the Runway, The Westside and At Ease. The collection has also expanded from fitted concert T-shirts sporting visages of Iggy Pop and Lou Reed to dresses, bottoms and tracksuits, all of which will also be available on Replica’s newly redesigned e-commerce site come spring 2019.

With the market flooded with basics, Saphier hopes Replica’s colorful, personal point of view will stand out, noting, “People don’t necessarily think of sweaters when they think of L.A. but I’m hoping to change that.”