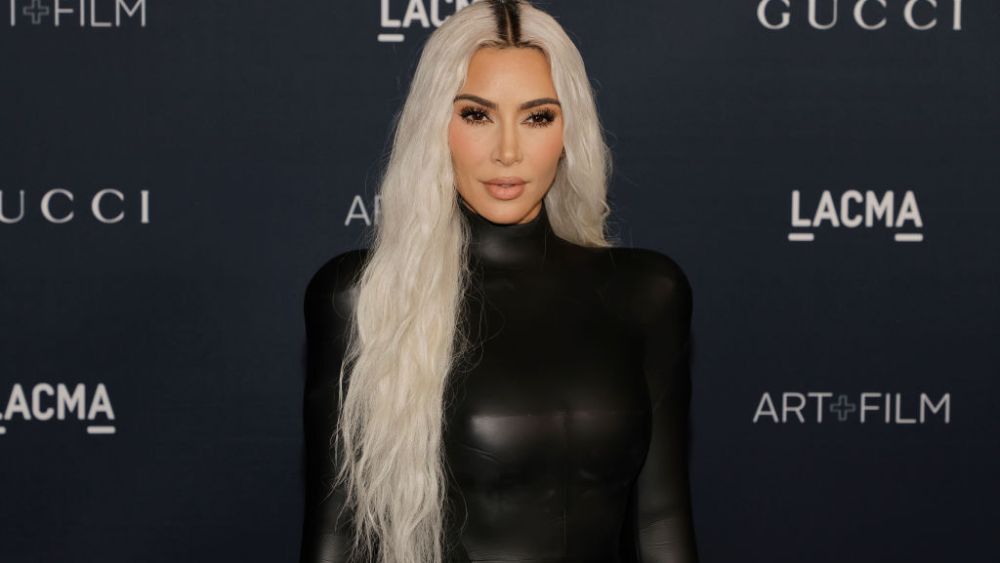 The silhouette included shoulder pads, a mock neckline, gloves that served as sleeves and a dramatic train. To complete the look, Kardashian wore a pair of pointed-toe heels.

Her platinum blond tresses were styled into a middle part with pieces swept around one shoulder. For makeup, she had dramatic eyelashes, a black smudge under-eye and a matte rose lip.

Accompanying Kardashian to the gala was her sister Kendall Jenner, who wore a see-through bodysuit with black mesh and a skirt.

The appearance at the gala comes at a busy time for Kardashian. In October, the entrepreneur joined the rest of her Kardashian-Jenner family to collaborate on a capsule collection of clutches with Judith Leiber Couture.

The reality television star also continues to work on her brand, Skims. Additionally in October, it was announced that the brand will be receiving the Inaugural Innovation Award at the CFDA Fashion Awards, presented by Amazon Fashion.

The LACMA Art + Film Gala, presented by Gucci, helped raise funds toward underwriting the museum’s initiative to make film a more central part of its curatorial programming and fund its mission, which explores the intersection of art and film. The 11th annual gala honored artist Helen Pashgian and filmmaker Park Chan-wook. Eva Chow and Leonardo DiCaprio returned as co-chairs for the event.