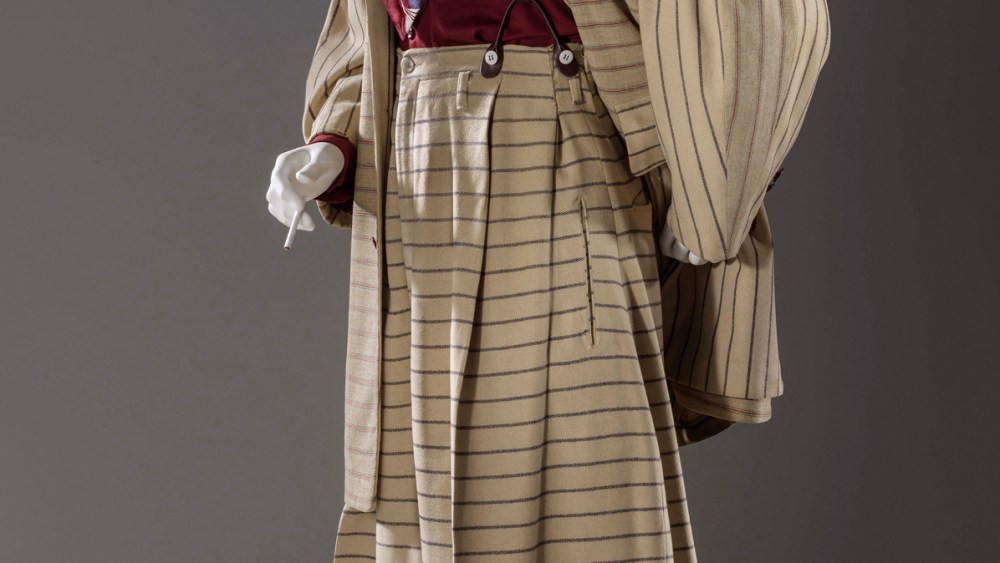 John Galliano has already seen it on one of his under-the-radar trips to Los Angeles. Now the public can take in men’s fashion in all its carefully curated glory at the Los Angeles County Museum of Art’s “Reigning Men: Fashion in Menswear, 1715-2015,” which opens on Sunday and is on view through Aug. 21. Two hundred looks spanning 300 years have been carefully culled to highlight both the history of menswear and its ties to contemporary fashion, through an art museum’s lens, rather than a purely historical perspective.

The show is divided into five thematic sections — Revolution/Evolution, East/West, Uniformity, Body Consciousness and The Splendid Man — and 90 percent of the pieces, or about 350 total that make up the 200 looks, are drawn from LACMA’s permanent collection.

Sharon Takeda, senior curator and head of LACMA’s Costume and Textiles department, noted that many living designers ended up donating several of the requested looks, complete with runway accessories. The exhibit took five years from conception to fruition, mainly because gathering the correct pieces took so long. The other 10 percent that was borrowed took up to two years to secure.

Among those based in Los Angeles or with close ties to California are: Phillip Lim, Chrome Hearts, George Esquivel, Jeremy Scott, Libertine, Rick Owens, and Yves Saint Laurent by Hedi Slimane (the latter a true historical piece now that Slimane’s departed).

Said Michael Govan, LACMA chief executive officer and Wallis Annenberg director, “We liked the counterintuitive notion of men’s ‘fashion.’ When you look at something like a Louis XIV-period piece, the investment, craft and money in these garments rivals women’s clothing.”

Govan also pointed out that each ensemble is like a sculpture in that they weren’t necessarily created for the medium of photography, but rather as three-dimensional objects that are just as fascinating from the inside out. The mannequins weren’t placed under glass so viewers could see the details in the fabrics and finish up close.

Commune’s Roman Alonso and Steven Johanknecht transformed the white gallery space into a more intimate and masculine setting that focuses the eye downward from the high ceilings toward the clothes. The rich wall colors and period-specific architectural details such as cornices drew on references from Louis XIV to Michael Graves. “I wish we’d added scent and music,” mused Alonso.

In a neat twist, the “Reigning Men” galleries connect into the “Robert Mapplethorpe: The Perfect Medium” exhibit, which allows guests to examine more male forms in art, sans the clothes.