Felipe Oliveira Baptista, Thierry Guibert and Géraldine Pailhas turned out for the party in Paris on Thursday night. 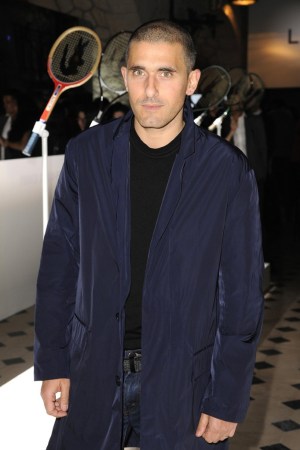 MATCH POINT: Due to the lifestyle brand Lacoste has become, it was hard to find a tennis-playing soul at the launch party of the label’s new tennis racket and matching capsule collection in Paris on Thursday night.

“I love tennis, but I don’t play because I suck,” laughed Géraldine Pailhas, fresh off the premiere of her new drama “Disparu en hiver” (“Lost in the winter”), in which she stars opposite Kad Merad.

Lacoste’s creative director Felipe Oliveira Baptista discreetly lobbed his answer about the sport in another direction, to the racket’s aesthetic. “It’s beautiful, isn’t it? It’s an homage to the spirit of René Lacoste, who is responsible for a lot of innovations, such as the first metal tennis racket.”

He added that the capsule collection, which consists of more than 20 pieces, including apparel and footwear, feeds into that theme. “All garments are fused, they are very technical,” explained Baptista about the run-resistant ultra-dry pique knits and diamond-weave taffeta tracksuits.

Thierry Guibert, Lacoste’s brand-new chief executive officer, who sneaked in almost undetected, was keeping a low profile. “I am just getting to know the whole team,” he divulged.

The ceo would not comment about his predecessor José Luis Duran’s sudden departure this week, but acknowledged: “José Luis did a very good job. The brand has much potential. Now we need to take it even higher.”