Artist Tu Sais Qui and rapper Arabyrd were among the guests Tuesday in Paris.

By Jennifer Weil and Paulina Szmydke on February 26, 2014
View Slideshow 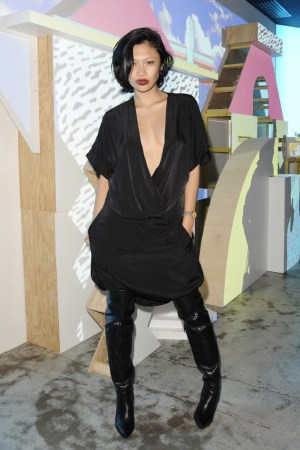 IN THE MIX: “It’s my first time in fashion,” said French graphic artist Marc Armand, aka “Tu Sais Qui (or “You Know Who”) at the presentation of Lacoste Live’s spring-summer collection on Tuesday night in Paris, for which he designed five prints. Lacoste’s polo T-shirts took on a joyful vintage vibe under his watch, mixing a flurry of influences including Eighties post-modernism, the Italian Memphis group and Nineties sportswear. “The collaboration is ongoing; two more seasons are in the works,” said the artist.

Meanwhile, Malaysian rapper Arabyrd was mixing it up, too. “People tell me I’m too advanced for my country, but being a rebel is so much fun,” she said, referring to being a female rapper in a Muslim country. Arabyrd, who raps in English and Sarawak, the dialect spoken in her native Borneo, will perform two new singles at the Chacha club in Paris on Friday night before flying off to Los Angeles to record an album.

Speaking prior to the party, at a Lacoste fragrance press conference, the French graffiti artist known as Zoer said his largest ever solo show is about to open, on March 8, in the Paris street-art gallery Openspace. “In this exhibition I’m going to talk about transition in population,” he said. “It’s all about architecture, building, movement. It’s a more figurative style rather than geometrical.”

Zoer is also currently designing three pieces of furniture out of wood.