A limited edition collection of polos was presented at the Palais de Tokyo on Sunday night. 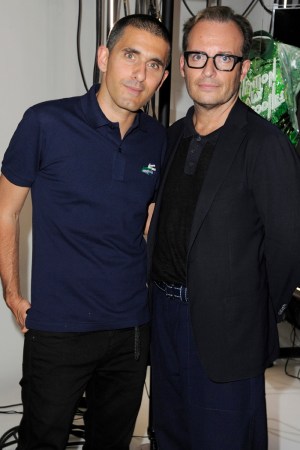 The French master embroiderer has teamed with sportswear brand Lacoste for a limited edition of 200 polos in four different styles, as well as a range of couture tops. “I think the most tricky thing in terms of technique was to embroider metal on jersey, because it kept cutting into the material,” Barrère said at the Palais de Tokyo in Paris on Sunday night, where the pieces were exhibited for one night only, kicking off couture week.

Among the highlights was a polo embroidered with colorful Plexiglas panels that were re-embroidered with mesh, while the slogan “Rene did it first” was stitched with little beads in a way that mimicked graffiti art.

“This collaboration is a way for us to push boundaries. It’s a good idea for a brand to work outside of its register and find a new language,” noted Felipe Oliveira Baptista, Lacoste’s artistic director, noting the lines between street and luxury getting more and more blurry.

While the couture pieces will be available on order, the commercial polos are to go on sale from July 15 and retail between 135 euros and 215 euros.

Designer Yazbukey provided a capsule of playful accessories, including flat, life-size tennis ball earrings and embroidered crocodile brooches. “We are checking if they are actually affordable viewing all the handwork that went into it,” said Bukey, fresh off her world tour with Shu Uemura.

A furniture capsule comprising 15 pieces for Italian Altreforme is next on her agenda. “The launch is in March,” said the surrealist designer.

The exhibit was accompanied by the launch of a new issue of The Reality Show magazine. A free application called Reality Scan developed in-house by the paper’s digital team allowed for a prolonged digital experience, including videos, backstage access – and the full story, which were available upon scanning in a part of the page. “What you see here is not the full interview,” explained editor-in-chief Tiffany Godoy of one article concerning the Lacoste-Lesage collaboration. “I kind of cut it off mid-sentence. The rest you can read later on the train or during lunch and show your friends on your handheld, which is what we do anyway, don’t we? So this [the magazine] stays at home, but it becomes a lifestyle tool, [whereby] digital creates a different emotional experience,” she said.