Bruno Mars in his collection for Lacoste.

Lacoste is getting off to a flashy start in 2021 with a first-time collaboration with Bruno Mars and a new style of retail debuting in Los Angeles.

Two years in the making, Bruno Mars’ collection of about 25 pieces — dubbed “Ricky Regal” after the pop star’s fashion “alter ego” — will be available from March 5 for just two weeks, at most. Lacoste is expecting the collection to sell out at some point during that time frame. This is only the second time that Lacoste, best known for its polos and association with tennis, will be collaborating with a non-athlete in any way. The first was a 2019 collaboration on tennis clothing with rapper Tyler the Creator.

“This is our biggest collaboration to date,” Jason Kim, Lacoste’s senior vice president of marketing for the U.S., said of working with Mars. And it marks the first fashion or lifestyle collection Mars has participated in, despite his years of celebrity status.

“I’ve been very fortunate to have been asked to do collaborations in the past, but it always came with guidelines,” Mars said in a statement. “Lacoste was the first and only brand that said ‘Bruno, we want you to make this truly yours.’”

He saw being allowed such creative freedom as “respect” and said getting it from an 88-year-old brand “was an honor.” Mars worked directly with Lacoste’s creative director Louise Trotter, who said working with him was “a great adventure.”

“He has a very clear vision and is obsessive with every detail,” she noted. “From concept to fittings, there wasn’t a single aspect that he was not fully involved.”

The result of such creative freedom is a bolder look for Lacoste. Mars’ Ricky Regal designs are full of colorful, graphic patterns with a dose of late 1970s nostalgia. There are several jackets for men and women, all with extended collars, and a set of button down shirts come in vivid patterns, mostly geometric but one tie-dye swirl for good measure. There are a couple of matching pull-on shorts and even some socks, slide sandals and a pair of gold, tinted sunglasses to complete the looks. Of course, there are polos, some updated with side stripes, another in a terry velvet. The pieces range in price from about $100 to $200. 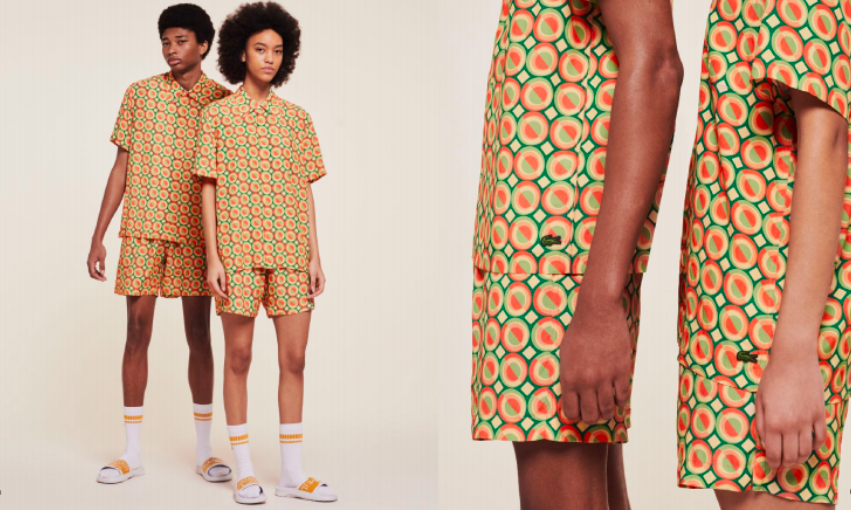 While the collection is technically a one off, there are ongoing conversations about the possibility of more in the future.

As for the sales roll-out of the Mars collaboration, Lacoste is in some new territory there, as well. It will be available for sale at The Webster in L.A. and New York, as well as LeBron James’ store in Miami, Unknwn. But a central part of the release is a new Lacoste store location also opening March 5 on the popular shopping strip along Melrose Avenue in Los Angeles’ West Hollywood neighborhood. Kim said the new store is really the first “retail concept” for the brand, in that it will differ significantly from its typical retail style.

“Consumers still want a physical experience,” he added. “They want connectivity and that’s really what we homed in on in West Hollywood, physical interaction.”

In part because of the ongoing coronavirus pandemic, but also because of a desire for shoppers or fans to “experience” the store, it will be by appointment only, likely throughout the life of the store, set to be open only through the end of the year. It will also be something of a showcase for other Lacoste collaborations and “hero collections,” as the look of it will change every six weeks or so. With a location that’s two stories and roughly 3,700 square feet, the first floor will be rotated, while the second will be dedicated to core Lacoste products, like polos.

For the Mars Ricky Regal collection, however, the store will have a unique build out, featuring green velvet walls, musical instruments and Las Vegas-style games to evoke the earlier lounger era of the city for which Mars has a particular affinity.

Kim admitted that this moment — the collaboration with Mars and investing in a yearlong “concept” store — is an attempt by Lacoste to shift its market position a bit. Trotter referred to the Mars collection as a “luxury sportswear brand.”

“We want desirability for the brand,” Kim said. “We obviously have deep roots in tennis and golf, but you have to innovate, you have to start thinking about a true consumer experience.”