While couture house Christian Lacroix has been reduced to a licensing operation, the designer continues to dress thousands. 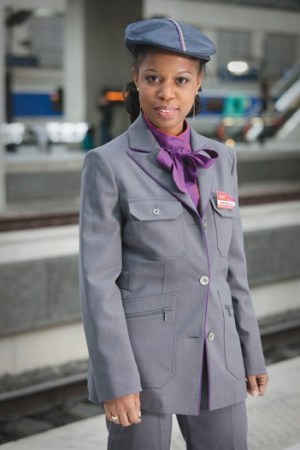 FAST TRACK: Although a Paris court recently accepted a plan to reduce couture house Christian Lacroix to a licensing operation, the designer continues to dress thousands. Last week, French railway operator SNCF said some 20,000 employees would sport new Lacroix-designed threads starting next month. The new uniforms are gray and purple and include blouses, skirts and jackets for women, and pants, jackets and striped shirts for men. No stranger to transportation, Lacroix has also designed the uniforms and train interiors for Tézo and TGV lines, as well as the flight personnel uniforms for Air France.

“Oh my god, look at this,” Styler said as Karan ushered her through the space past a large poster for the DVD series. “I have never seen me so big,” she said with a giggle. Her husband Sting arrived a few minutes later and made his way up the stairs to the second floor loft of the Stephan Weiss Studio. There, a crowd including Bernadette Peters and Lorenzo Martone enjoyed drinks and hors d’oevres in a cozy holiday atmosphere.

SECOND ACT: Proving there really is life after fashion, Michael Skidmore, a veteran of Barneys New York, Calvin Klein and most recently, Searle, has penned a play. Entitled “His and Hers,” the three-act romantic comedy is staged in a West Village apartment and relates the tale of a recently broken-up couple who decide to continue living together until they sell their apartment. When each begins to date, they agree to bring those dates for dinner at the apartment, at which point things get a tad uncomfortable. “The theme of the play is jealousy,” Skidmore said, “how it’s one of our strongest human emotions and our greatest weakness.” “His and Hers” will be presented from Wednesday until Dec. 20 at the American Theater of Actors.

MAN’S NIGHT OUT: Former football great Carl Banks was clutching an armful of apparel as he walked past the live broadcast of ESPN New York’s “Michael Kay Show,” which was set up in the middle of the men’s department. That was the scene at Lord & Taylor on Thursday night for the Guys’ Night Out event with Details magazine. The 10th floor was busy with customers who had come to take in Kay’s radio show, sip on local brews and try their hand at blackjack as they shopped at the Buy a Gift, Get a Gift event. Customers who spent $100 or more received bonuses that ranged from a $20 L&T gift card to iPod Nanos, Garmin GPS devices, Panasonic Blu-ray Disc Players and more. Anyone who spent $1,250 received an Acer Aspire One Notebook valued at $329. The event was the brainstorm of L&T top men’s merchant Jon Greller, who has made it his mission to attract men to a store that is seen appealing mainly to women.

WITH HONORS: The French sure love their fine linens and sheets. On Wednesday night, Joan Carl, chairman of D. Porthault, was granted a Chevalier de la Légion d’honneur by the French government. France’s president Nicolas Sarkozy personally chose Carl to receive the award, which was given to her at the French Residence in Washington, D.C. “Thomas Jefferson said, ‘France is every man’s second country,’” Carl said after the iconic red lapel was pinned on her lapel. “How right he was. The culture, camaraderie, beauty, and elegance of France are unmatched anywhere in the world.” Carl joins a group of notable women who have received the honor, including Josephine Baker, Pamela Harriman, Julia Child and Barbara Streisand.