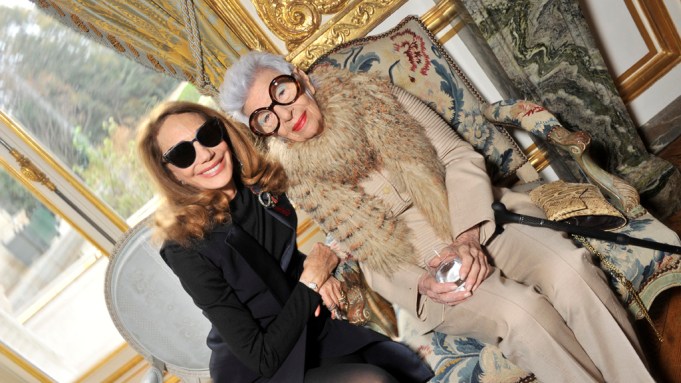 LADIES WHO LUNCH: With its current incumbent only the second female to hold the post in history, the residence of the U.S. Ambassador to France was an appropriate venue to host a fashion week lunch in honor of International Women’s Day, which falls on March 8.

Swarovski and the United Nations Foundation were the co-hosts for the event Thursday, which gathered a flurry of distinguished ladies including Iris Apfel, Monica Bellucci and Marisa Berenson.

“I’ve worked in politics, government and business all my life, and there were many times in the early days when I was the only woman in the room,” said Jane D. Hartley, U.S. Ambassador to France, of how the situation for women has changed during her working life.

As to the current presidential race in the U.S., which could put America’s first female president in the White House, she said, smiling: “As a diplomat, I am not supposed to talk about politics. I was fairly knowledgeable in this area in my old life, but I’m somewhat happy to be away from it. For the first time in a while, I am watching it from afar.”

At 94, Iris Apfel — the flavor of Paris this fashion week with her “Iris in Paris” exhibition at Le Bon Marché — reflected on how things have changed for women during her lifetime. “More and more is open to women, and women are taking advantage of that and doing a very good job, and deserving the power that they’re getting,” she said.

“I have to say I never had a problem getting a job because I was a woman, but many people did,” mused Apfel. “I was lucky I guess.”

For Monica Bellucci, who is part of French women’s movement Paroles de Femmes, gender equality is also a subject close to her heart. “We are in a part of the world where women have the right to talk, and we have to work more to help those women who don’t have rights,” she said.

Over a lunch elaborated by French chef Nathalie Nguyen, Nadja Swarovski, executive board member at her family’s jewelry firm, spoke of its commitment to women’s empowerment. “My great-great-grandfather felt very strongly about letting every woman have the sensation of what it feels like to wear a diamond,” she said.

“Psychologically, jewelry is one of the strongest means of self-expression for women, so to able to support that self-expression is an incredible sense of empowerment,” Swarovski continued.

“We wanted to take it further, give it a bit of an intellectual empowerment, jewelry with a meaning. It’s not just decorative.

As such, Atelier Swarovski has created a bracelet sold to benefit the UN Women for the Safe Cities Global Initiative, with 30 percent of sales proceeds to be donated.

“It’s a wonderful cause. We’re empowering our customer,” she said.