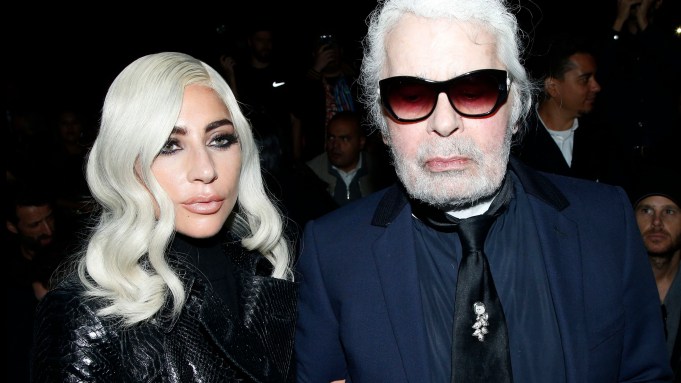 PARTY FAITHFUL: The front row at Hedi Slimane’s show for Celine was filled with longtime friends of the designer, with Karl Lagerfeld, Catherine Deneuve, Lou Doillon, Joséphine de La Baume, Alexa Chung and Mark Ronson joining a legion of musicians at the event, held in a tent in front of the Hôtel des Invalides on Friday.

While the dark venue provided good cover for many celebrities in attendance, there was no missing Lady Gaga, who stood in the center of a throng of flashing cameras with Lagerfeld. The singer provided the first glimpse of Slimane’s new Celine designs when she was seen carrying the 16 handbag on Instagram on Aug. 30.

Gaga, wearing an Alaïa snakeskin trenchcoat, was on a break from promoting her new movie “A Star Is Born” following its U.K. premiere on Thursday. Ronson helped to write the track “Shallow,” in which she sings a duet with her costar Bradley Cooper.

Sitting opposite her was Alex Kapranos, lead singer of Franz Ferdinand, who has worn Slimane’s creations since the designer was at Dior Homme.

“Hedi’s always been a good friend to the musicians all around the world and we all love him as well — he’s a great guy. Personally speaking, and probably for all my friends who are here tonight, we’re very excited to see what he’s coming up with next. It’s like waiting to hear your favorite band coming out with a new album,” he said.

“He’s got the unpredictability of a real artist as well, which I love about him,” Kapranos added. After the show, the music crowd planned to celebrate together. “There will be something happening. I imagine there’ll be a bit of chaos — that’s what I’m hoping for, anyway,” he said with a smile.

After that, it’s back on the road for the Scottish musician. “We have a little tour around South America, then we’re off to East Asia and then finishing the year at Hogmanay in Edinburgh. We’re ringing in the New Year, which is really exciting for me, so that’s going to be the end of our long year of touring,” he said.

South Korean singer CL declared the show a success before it had even started. “Of course Hedi pulled it off — that’s how I would say it — and I’m excited to be here to support him as a friend,” she said. She has joined forces with Black Eyed Peas on a track for their new album “Masters of the Sun,” set for release on Oct. 12.

“I shot the video. I’ve been collaborating with Will.i.am for a very long time, and it’s more like, oh, finally it’s coming out, so I’m excited about that,” she said.

Anyone struggling to identify other front-row guests shouldn’t feel too bad. Many of them belonged to rising French bands with names like Papooz, Petit Fantôme, Jaune, Bad Pelicans and La Femme — the latter also wrote the soundtrack for the show. Look out for their after-party antics on Slimane’s online diary in the next few days.