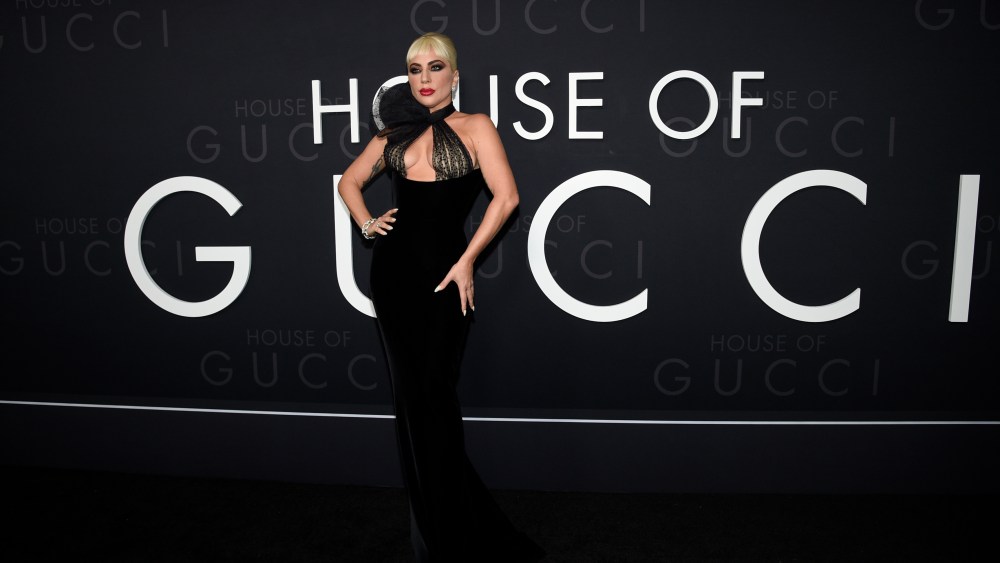 Lady Gaga continued her red carpet winning streak at the latest premiere of “House of Gucci.”

The Oscar winner wore a custom Armani Privé gown at the New York City event Tuesday night. The singer-actress wore a black velvet halter gown with pois d’esprit tulle and crystals accented with a bow. Lady Gaga paired the look with Tiffany & Co. jewelry, a smokey eye and a red lip. Jared Leto also had a high-fashion moment at the film’s premiere, wearing a velvet, mustard-hued suit and a fur jacket from Gucci’s fall 2021 ready-to-wear collection.

Her Armani Privé gown comes after several other high-fashion looks she’s worn throughout the “House of Gucci” press tour. She started off at the film’s London premiere wearing a purple draped dress from Gucci’s spring 2022 rtw collection, which debuted in the design house’s Love Parade on Hollywood Boulevard earlier this month. She paired the look with sheer, crystal-detailed opera gloves and sheer lace, thigh-high fishnets worn with black platform boots.

She then wore a custom Versace gown at the film’s Milan premiere later that week, wearing a dress designed with a corset top with lace-up detailing and a form-fitting skirt with a thigh-high slit.

Lady Gaga has worn other standout looks during the “House of Gucci” press tour from designers like Valentino, Celine, Alexander McQueen, Lanvin and Et Ochs.

“House of Gucci” is a dramatized version of the real-life events surrounding the Gucci family, focusing on the murder of Maurizio Gucci in 1995, who was killed by a hitman hired by his ex-wife Patrizia Reggiani. Reggiani served 16 years in prison for the crime. The film hits theaters on Nov. 24.

Everything to Know About the ‘House of Gucci’ Film

Who Are the Real-life Characters in the ‘House of Gucci’ Movie?

The House of Gucci: A Complete Timeline and History