Olivia Palermo, Mathilde Bisson and Atlanta de Cadenet were also among the guests. 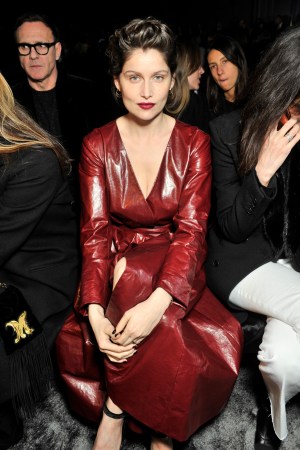 CROSS-POLLINATION: Sitting in the front row at the Nina Ricci show in Paris on Saturday evening, Laetitia Casta filled in French Vogue editor in chief Emmanuelle Alt on her directorial debut, a short film with a strong connection to fashion.

“Fashion has inspired me a lot, in terms of lighting, camera angles and also how it represents women,” explained the model and actress, who is the face of Nina Ricci’s fragrance L’Extase.

Casta was wearing a glossy burgundy wrap dress designed by Nina Ricci creative director Guillaume Henry, which she set off with matching lips and nails. “Guillaume is strongly inspired by cinema,” she noted. “I adore what he does because I don’t feel disguised in his clothes, and it’s always about the woman first.”

Sitting across the aisle was Mathilde Bisson, the star of Casta’s as-yet-untitled short. The statuesque French actress said she has started writing a script of her own, but first, she will take a break after logging 150 performances of the bedroom farce “Cactus Flower” at the Théâtre Antoine.

“I’m going to take a vacation in the sun and take my mind off things for a while,” she said.