The party was to unveil the limited-edition makeup line he created with the Japanese brand. 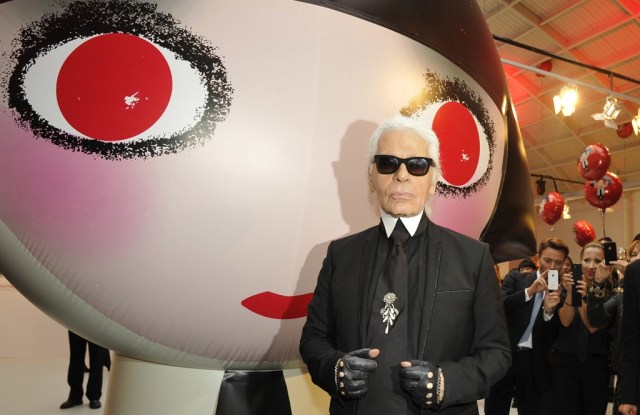 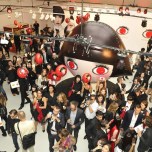 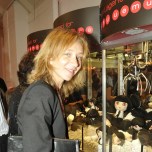 SHU BIZ: Karl Lagerfeld wasn’t the only colorful character Tuesday night at the Paris press launch of the special holiday limited-edition collection he created for Shu Uemura. Mon Shu — the cartoon spokesmodel he dreamed up for it with red eyes and a jet-black bob, dressed in Lagerfeld’s signature high white collar and black tie — was ubiquitous.

She popped up on product packaging and took center stage in the vast Espace Commines location as an oversized balloon. Waiters served pastel-colored Japanese desserts in containers whose lids were decorated with Mon Shu’s face, and so were small round chocolates and other delicacies.

As a plush toy, beauty editors fished her out of tanks with mechanical claws, amusement park-style. And as a tiny decal, she was applied to their nails during makeovers. An animated Mon Shu even starred in a variety of short films, including spots where she journeys to places like China and France while magically riding a tube of lipstick.

The Shu character takes a cue from Japanese schoolgirls, whose uniforms Lagerfeld finds impeccable. “They dress a little like me, even if this is more exaggerated,” said the designer.

For Shu Uemera’s international artistic director Kakuyasu Uchiide, the project had a main highpoint. “Working with Karl was one of my dreams as a professional makeup artist,” he enthused.
The limited-edition makeup collection will be out starting in October.