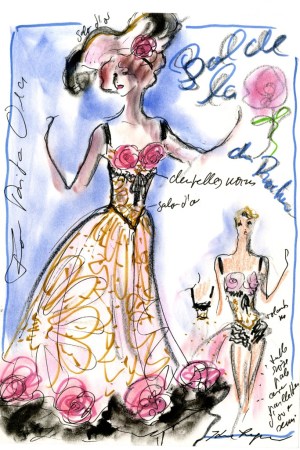 NOW AND THEN: Giving a familiar theme — La Belle Epoque — a new spin, Karl Lagerfeld chose “Belle et Pop” as the theme for the Bal de la Rose du Rocher in Monte Carlo on March 23. To wit: He will mix music and imagery from the “golden age” in France with the latest in rap, hip-hop and soul.

Lagerfeld conceived the costume for performer Rita Ora, who — along with rapper Theophilus London and the Prague Concert Philharmonic — make up the evening’s entertainment. He also tapped Caroline de Maigret, an ambassador for Chanel, to DJ at the party.

Under the auspices of Prince Albert of Monaco and Princess Caroline of Hanover, the annual event raises money for the Princess Grace Foundation, a charity supporting various pediatric health initiatives.

This year’s ball is to mark the 150th anniversary of the Société des Bains de Mer, the company that owns and manages the Casino de Monte-Carlo, the Opéra de Monte-Carlo and the Hôtel de Paris Monte-Carlo.