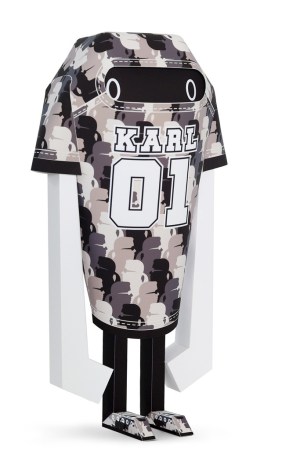 PAPER ROUTE:  With his graphic personal style, Karl Lagerfeld proved a mother lode of inspiration for Japanese paper artist Shin Tanaka. Consider Glove-y, a boxy, cartoonish type evoking one of Lagerfeld’s leather-clad hands; or T-Boy, a hunched, shadowy figure with eyes peeping out from the neck hole of a camouflage shirt with a Lagerfeld truism tagged on the back: “Personality begins where comparison ends.”

Dozens of Tanaka’s manga-like characters — a cross between origami and street art – went on display Thursday night at the Karl Lagerfeld boutique on the Left Bank in Paris as part of the annual Parcours Saint-Germain, a display of contemporary works in the artsy neighborhood.

Lagerfeld posed next to his paper-doll likeness, plunked on a table next to a white cat figure representing his pet Choupette – wearing sunglasses, just like her owner.

Tanaka, speaking through an interpreter, said his first attempt at a Lagerfeld figurine took 55 attempts of meticulous cutting and gluing. “I wanted it to be perfect,” he said.

The quirky characters are to remain on display at the Saint-Germain store until Oct. 27, and then will move to Berlin from Nov. 24.

Toting a trio of cell phones in a small leather case, Lagerfeld arrived at the party from Rue Cambon, where he finished shooting Chanel’s spring 2014 fashion campaign. It is to feature Lindsey Wixson in the recently revamped Chanel studio, with its platinum parquet and mirrors galore.

Lagerfeld enthused that the Kansas-born model is a natural in front of the camera, and he’s also cast her in all the fashion movies he makes for Chanel, including the 30-minute feature to be screened in Dallas next month in tandem with his Métiers d’art collection. “I’ve known her since she was 15,” the designer said.