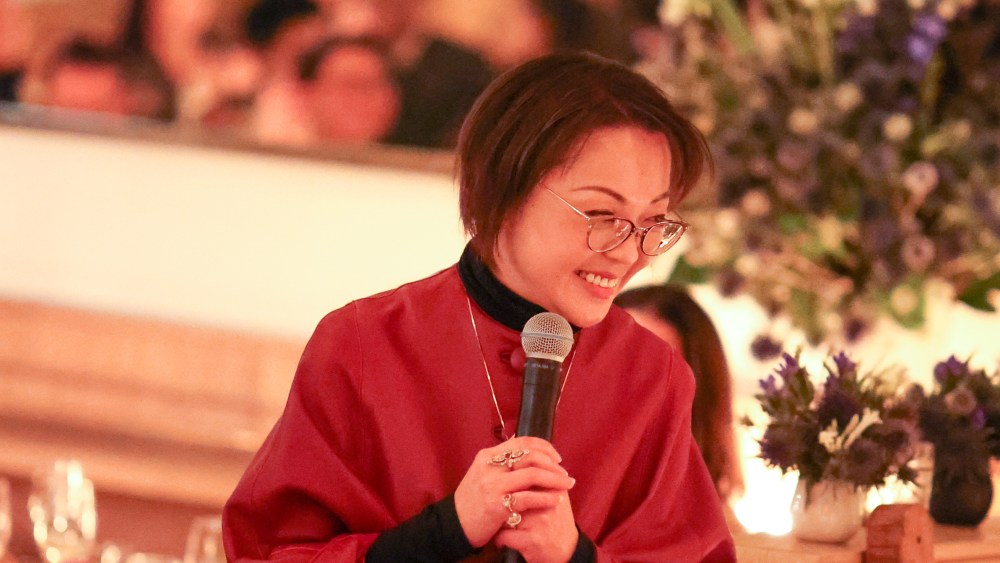 After ringing the opening bell at the New York Stock Exchange in the morning, jumping into the whirlwind of Wall Street for the first time, Team Lanvin Group headed to Altro Paradiso in SoHo on Thursday night to celebrate.

“It’s not for business tonight,” said Joann Cheng, chairman and chief executive officer of Lanvin, which raised $150 million and wiped out its debt when it merged with the Primavera Capital Acquisition Corp. SPAC and became a public company.

Cheng noted it was a deal that was both 15 months in the works and, for her at least, featured an element of “destiny.”

“I started my career at KPMG as an accountant,” said Cheng, remembering back to when her then-new husband asked her to name three of her dreams.

“As a very young accountant without any real romantic dreams, I gave him very wild ideas,” she said.

The first was to walk the red carpet. Check.

“My second dream was to get one company listed on the NYSE,” she said, noting that at the time she imagined being chief financial officer and not the CEO.

“The third dream, I cannot tell you right now,” she said. “I will tell you when it comes true.”

That bears watching as Cheng seems to have a way of making her dreams come true.

Witness the listing itself.

Mitch Garber, investor and Lanvin board member, had a point when he described getting the deal through — with a SPAC and in this market — a “financial miracle.”

But being a public company requires making a financial miracle happen with some regularity.

On that score, Garber said Lanvin — which owns its namesake brand as well as Wolford, Sergio Rossi, St. John Knits and Caruso — had some serious name recognition on its side.

“If everybody knows the brands, then half the work is done,” he said.

The stock market at least started to become more cooperative.

While shares of Lanvin went on a rollercoaster during their first day, trading up over 130 percent only to close down 25.6 percent to $7.37 — the stock was rebounding by Friday, closing up 26.6 percent at $9.66.