The fall exhibition is to feature more than 350 images of the fashion house. 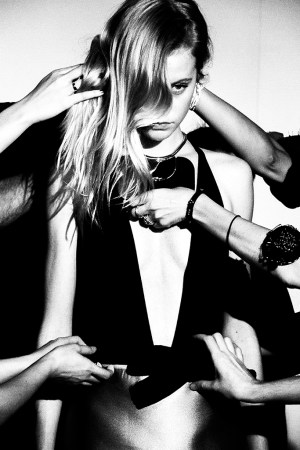 FREEZE FRAME: Can backstage preparations before a fashion show get as intense as a Formula 1 pit stop? They certainly seem so in a Katy Reiss photo of a model about to hit the Lanvin runway, with at least six hands reaching into the frame to adjust her hair, her jewelry and the belt around her waist.

It’s one of more than 350 images that are to go on display this fall in “Alber Elbaz/Lanvin: Manifeste” at the Maison Européenne de la Photographie in Paris. The exhibition, scheduled for Sept. 9 to Oct. 31, is meant to capture the inner workings of the French fashion house. Juxtaposed is the supremacy of the image in today’s world with Elbaz’s personal, hands-on approach to design.

Lanvin characterizes it as an “introspective” exhibition about the creative process, captured by professional photographers and Lanvin staffers including But Sou Lai, Mark Leibowitz, James Bort, Juliette Da Cunha and Alex Koo, who is Elbaz’s partner and the company’s merchandising director.

A video of backstage scenes, with a voiceover by the designer, completes the behind-the-scenes exploration.