Lanvin Kicks off Christmas at Claridge’s 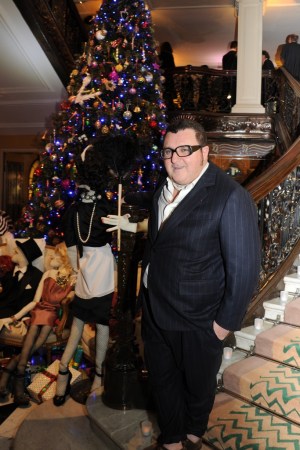 LONDON — Alber Elbaz held court at Claridge’s hotel in London on Monday night, unveiling the Christmas tree he designed for the hotel.

“The first thing I wanted to do is not change too much of the tree, I wanted to keep that tradition. Because I think that is the best thing about holidays…is that they don’t change,” Elbaz said.

The designer also created a tableau of Lanvin-clad mannequins — some of them dressed as Claridge’s maids and concierge staff — lounging on sofas at the foot of the tree.

“It’s a very democratic moment,” said Elbaz with a grin. “The maid and the concierge, are dancing, sitting having fun with all the guests of Claridge’s.”

Sir Paul Smith, Philip Treacy, Emilia Fox, Tallulah Harlech, Joan Burstein, and Mary Charteris were among the guests who turned out to sip Champagne and nibble on gingerbread biscuits.

“I love that Alber is the fairy on top of the tree,” said an eagle-eyed Harlech, who had spotted a doll version of Elbaz, complete with spectacles and bow tie, sitting atop the evergreen.

Later in the evening, the pianist Rosey Chan, director Mike Figgis’ girlfriend, entertained guests with pieces by Ravel and Bach, which she played on a grand piano at the top of Claridge’s sweeping central staircase.