London's Savile Row may be thoroughly British, but it now has a French accent, too. Lanvin has launched its men's store on the famous street. 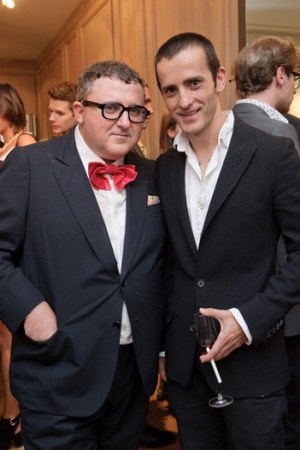 TAKING A BOW: London’s Savile Row may be thoroughly British, but it now has a French accent, too. Lanvin launched its men’s store on the famous street, a sleek unit offering men’s wear, a semi-bespoke service and, of course, a range of trademark bow ties. “Look, mine even has my initials,” said Alber Elbaz, pulling a bright pink silk bow tie from his neck to reveal the embroidered letters. Elbaz was on hand with Lanvin’s men’s designer Lucas Ossendrijver and guests including singer Mika, Ozwald Boateng, Simon and Yasmin Le Bon, and Jefferson Hack to fete the occasion. So, why Savile Row? “It’s mythic,” said Elbaz. “For me in London, there was no other place.” Later, Elbaz and pals including Goldie Hawn, Bianca Jagger and Kate Hudson capped the evening with a candlelit dinner at Sir John Soane’s Museum in Lincoln’s Inn Field.