The entrepreneur displayed no shortage of confidence about the the capsule collection he designed with Gucci as he mingled with Japanese customers. 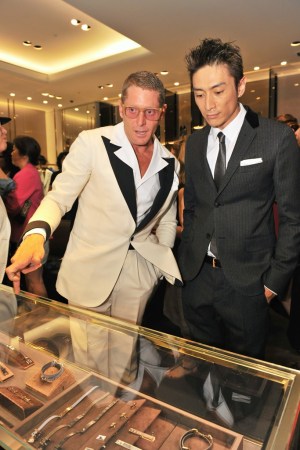 RARE FORM: Lapo Elkann displayed no shortage of confidence about the capsule collection he designed with Gucci as he introduced Japanese customers and celebs to “Lapo’s Wardobe” at the Italian brand’s revamped Aoyama flagship in Tokyo on Thursday night.

The entrepreneur, who just hosted a similar event at a Gucci store in Shanghai, was eager to talk up the made-to-measure collection’s emphasis on customization, modern tailoring and Italian heritage. He also sought to distance it from other “mass luxury” products on the market.

“I think that what we are seeing tonight has no competition,” he said, sporting an off-white suit with wide black lapels from the collection. “Tom Ford, [Ermenegildo] Zegna are not the brands that I fear in this scenario because the quality and the level of the product is higher… in leather goods, we haven’t looked at being close to [Louis] Vuitton, but we have looked at being close to Hermes.”

“I would say, as much as I do respect — and I’ve tried every tailor, I’ve tried Hunstman, I’ve tried Anderson & Sheppard, I’ve tried Gieves & Hawkes, I’ve tried Caraceni, I’ve tried Rubinacci — I would say that the price is too high in England and, secondly, the fit is old school,” he said, shortly after chatting with former soccer star Hidetoshi Nakata and actor Yusuke Iseya. “Going to the tailor doesn’t mean that you only need to be elegant and refined. You need to have the sexiness incorporated in the elegance.”

Elkann said he is also taking advantage of the trip to meet with his business team in Asia for his own label Italia Independent. The brand is planning to open its own store in Tokyo, possibly as early as November or December of this year.

“We are already opening next month in Paris, Miami, LA and New York but for Asia we will be opening very shortly,” he said.