The Dutch model hosted a quasi-traditional British pub quiz to celebrate the launch of her new capsule collection for Frame. 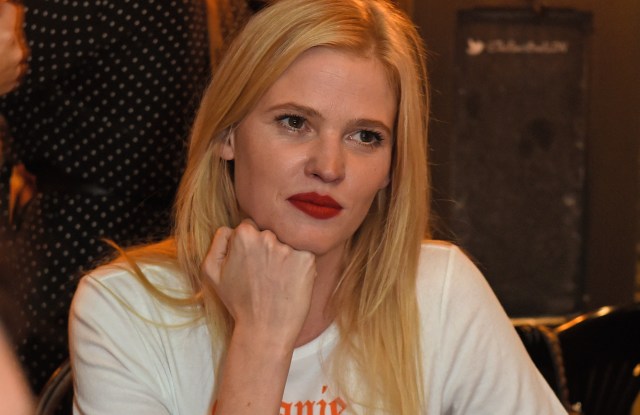 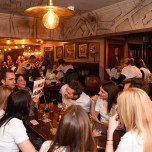 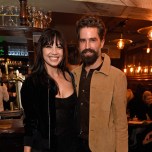 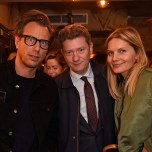 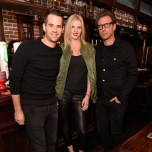 QUESTION TIME: Lara Stone hosted a quasi-traditional British pub quiz at the Punchbowl in a back street of London’s Mayfair to celebrate the launch of her new capsule collection for Frame.

Stone, whose team “Oranje” included Frame founders Jens Grede and Erik Torstensson — as well as Natalie Massenet and Daisy Lowe — came last. “I’m devastated that we lost. There was Brexit, and then there was Trump, and now this. This is the straw that broke the camel’s back,” bemoaned Torstensson, an expert in questions pertaining to fashion photography.

“I got all the questions in the picture round right, even the crop of Justin Bieber’s eyebrow because I did that Calvin Klein campaign. I generally fail in pretty much every other topic: News, general knowledge.”

Stone is a pub quiz regular and said her specialty topic is the picture round. “I usually go to the pub around the corner from me, the Princess of Wales, on a Tuesday. They ask really tough questions like, ‘What kind of limestone was used to build a lighthouse in North Cumbria?’ So I’ve only ever got two questions right, but it’s not about that, it’s about fun with friends.”

The exuberant model Jack Guinness and GQ fashion features director Jonathan Heaf shared the role of quizmaster, posing questions such as: “What form of alcohol was invented in the Netherlands?” [gin] and “Fill in the blank: Diana Vreeland famously said, ‘Blue jeans are the most beautiful things since the…'” (gondola).

Guests including Caroline Sieber, Gabriella Wilde, Maryna Linchuk, Pernille Teisbaek, Daisy Lowe and Marissa Montgomery made up some of the other teams.

The nine-piece capsule collaboration, called, “If you ain’t Dutch, you ain’t much,” came from a behind-the scenes-joke shared between Grede, Torstensson and Stone, who appeared in the brand’s spring 2016 campaign. The collection is inspired by the model’s Dutch heritage and features denim staples given a dirty wash — preferred by Stone — as well as sweatshirts and a hoodie emblazoned in gothic typeface with “Lara,” “Livid Lara” and “Lara 10,” an homage to her love of soccer and her national team.

The collection is available at Frame’s Melrose Place store and Framestore.com as well as a soon-to-be-revealed specialty store in Amsterdam. Prices range from $199 for denim shorts and skirts to $349 for a bomber jacket.

The brand is garnering a reputation for playful, off-beat events: In December it recruited Poppy Delevingne and Derek Blasberg to host a model “beer pong” night. Could model mud wrestling be next?