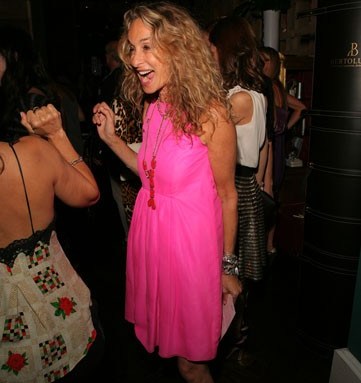 LAST CALL: Packed in tightly with other Max Azria fans at his show Tuesday night was Malin Ackerman, attending her fifth runway spectacle of the week — and invariably her last. So how has the comedic powerhouse been keeping up her energy? “Lots of water and sleep,” she offered as seatmates Zoe Saldana, Eva Amurri and Michelle Trachtenberg posed for pics. “I’m lucky. I haven’t had anything too obnoxious like changing in the back of a cab.” Ackerman was off to attend the Prada party later that night and, later in the week, the premiere of friend Carla Gugino’s film “Righteous Kill.”

BABY ON THE BRAIN: Alice + Olivia founder and designer Stacy Bendet found internal inspiration this season. Due in November, the pregnant designer is expanding her children’s line for spring. “As I was pregnant and I found out I was having a girl, I just started sketching little girl clothes like crazy,” she said. The girls’ offerings are expanding from six items last year to about 24 for spring. Two friends’ daughters modeled at the in-store presentation Tuesday, where Bendet dutifully checked on her new husband between showing around buyers. “I like to show the clothes in a way that inspires retailers,” she said of the space that was taken over by hay bales and a vintage car. “This time we gave it a more bohemian vibe.”

HELP WHEN NEEDED: On Monday night, W magazine threw a “New York Affair” cocktail party at Midtown’s Hudson Terrace, with co-hosts Charlotte Ronson, Paula Patton and Nicole Chavez (the brains behind many of Rachel Bilson’s red-carpet looks). Given Chavez’s occupation, several guests were prompted to discuss the pros and cons of having a stylist. “I wouldn’t be as well accessorized without her,” said Monet Mazur of her stylist — and date for the evening — Jessica King. “But my style wouldn’t be all that different.”

Which makes one wonder, why hire one then? Patton wasn’t sold. “Stylists are very expensive,” said the starlet, who coordinates her own ensembles for red-carpet events. Although, she admitted, they do have their value. “Once when I had gained 10 to 15 pounds, I wore a baby-doll dress and everyone thought I was pregnant. I wore a belt for about three months after that.”

THE NAME GAME: Those looking for the 6267 slot on the official Milan show calendar released Monday are in for a surprise. Instead of the brand’s iconic four numbers, the duo Tommaso Aquilano and Roberto Rimondi are down as Aquilano e Rimondi with a show penned in for Sept. 23 at 8 p.m.

Aquilano described the new name as a creative and personal evolution embraced by himself and Rimondi, but declined to elaborate further. According to sources, instead, it stems from issues with their partners in the company, 6267 Arte, in which they retain a 50 percent stake. Sources also indicated that there will be no 6267 spring collection, only a pre-collection, and that the brand’s future is nebulous.

STIFF COMPETITION: Even though they’re competing for the same golden prize, Irene Neuwirth and Richard Chai are getting along like the best of teammates. The respective jeweler and fashion designer, who are both nominees for the CFDA/Vogue Fashion Fund, are collaborating for Chai’s runway show today. The two met through the competition and developed an appreciation for one another’s designs. “I was immediately taken by the simple, pure beauty of her jewelry,” said Chai of Neuwirth. “There’s a real honesty in her approach to making jewelry that respects the cut of the stones she uses. This will be my first time incorporating jewelry into a show.”

Neuwirth gave the compliment right back, adding: “Everyone [nominated this year] is so super talented. It’s such an honor to work with Richard. I feel a kinship with him.” Chai will be using some of Neuwirth’s older pieces, including those with rainbow moonstone and labradorite.

IN THE MOMENT: Once filming gets going for “The Moment” next month in New York, Julia Stiles will have two roles to play — one as the daughter of Hope Davis’ character and another as her off-kilter psychiatrist. But Tuesday morning, her only assignment was to catch the Matthew Williamson show. The New Yorker and Columbia grad said she doesn’t get hassled that much moving around the city and she knows which neighborhoods to avoid to fend off any paparazzi. “Other than that, New York is pretty great. There are so many people on the street and so many distractions,” Stiles said.

And Stiles was savvy enough to anticipate the paparazzi pack under the tents. “You have to turn it on for fashion week,” she said.

A few seats down, Kelly Osbourne, one of the week’s ubiquitors so far, said she hasn’t turned off her clothing company for good. “It’s something I definitely want to get back to in the future. But I’m not the kind of person who would attach my name to a chain,” she said. “That’s not fashion. That’s making a quick buck. And I don’t want a stinky perfume, either. I would rather do something when I am ready and do it right.”

And Osbourne was in a similar mood later in the day at the Marc by Marc Jacobs show. Dressed in a vintage red top, she said of her choice: “It was owned by Boy George, something like that. I thought, f— it, I’m comfortable. I don’t care about fashion protocol.” For the record, she did don Matthew Williamson at his show and Betsey Johnson at hers. But at Marc Jacobs on Monday night, she was in Alice Temperley. “All the clothes Marc sent me were too big,” she said.

ROYAL FLUSH?: Jeff Koons’ show at Versailles, which opens today, is stirring a polemic in the French press. Le Monde, for one, questioned in a front-page article whether the exhibit was a way for French billionaire François Pinault, who is helping underwrite the exhibition, to increase even more the value of Koons’ works he owns: six of Koons’ pieces are on display. And Jean-Jacques Aillagon, who now runs the Chateau de Versailles, used to run the Palazzo Grassi for Pinault in Venice. Among other collectors helping sponsor the show are Eli Broad, Dakis Joannou and Edgar de Picciotto. Aillagon has shrugged off the brouhaha, reminding reporters that Koons’ prices already are sky high. The artist’s “Hanging Heart” sculpture in stainless steel last year sold for $23.6 million at Sotheby’s, setting a record for a living artist. A spokeswoman for Pinault declined to comment.

MET GROWTH: Fans of the Costume Institute will be pleased to hear that its galleries at the Metropolitan Museum of Art are about to go through a vast expansion. Few details are available yet, but the Costume Institute plans to hold an event at the city’s Villa Necchi on Sept. 26 in Milan, during the city’s fashion week. The museum’s president, Emily Rafferty, and the Costume Institute’s curator in charge, Harold Koda, will unveil the plans for the expansion with Vogue editor in chief Anna Wintour. The new space is expected to be able to house exhibits the size of the most recent “Superheroes” show, which, due to its scope, took place in other exhibition galleries at the museum.

DIGITAL AGE: Move over, mothballs. A conceptual video of Helmut Lang’s sprawling digitized clothing archive is on show at Berlin’s 032c’s Museum Store. Titled “Store,” the film, which features 3,000 out of 10,000 Lang pieces digitally recorded over the past four years, is on view at the space through Oct. 11.

COLOR BLIND: Runway watchers and other industry insiders are welcome at “Race on the Runway,” a discussion about diversity in modeling, or the lack thereof. Bethann Hardison, who has her own modeling and management business, kicked off the controversy a year ago and will once again be hosting the Sept. 15 gathering at 11 a.m. at the Bryant Park Hotel’s screening room. Casting agents, modeling executives, stylists, designers and other Seventh Avenue types are what she is after. “These are the people we are enlightening, who we want to shift their thinking or just have them sit and listen,” said Hardison, adding that she wants people to become color blind.

GOODFELLAS: Longtime friends David Arquette, Ben Harper and David Bedwell marked the debut of their new contemporary line Propr on Monday night with a party/photo shoot/mini concert. The line, which includes both women’s and men’s wear, will retail from $72 for a shirt to $350 for outerwear and, according to Bedwell, the former designer of Original Penguin, is approximately 65 percent organic. “The goal was to create a timeless, truly classic collection,” he noted. So where, exactly, does a Grammy Award-winning musician and an actor/producer/director well known for his wacky red-carpet wares fit in? “These guys are just so into clothes,” joked friend Meg Ryan, as a model strode toward photographer Marc Baptiste sporting a chic navy trenchcoat with coconut buttons and pleat detail, followed by another in a pretty cotton sundress trimmed with ruffles.

The trio worked as a team on everything from fabric selection and design to smaller details such as the perfect cuff length, as evidenced by Harper, who jumped onset in between dances with his 4-year-old daughter to make adjustments.

Courteney Cox and 4-year-old daughter Coco were standing by wearing mommy-and-me chambray dresses from the line, as was Harper’s wife, Laura Dern. So as the shoot wound down, and more well wishers including Tobey and Jennifer Maguire, Jennifer Aniston and Surf Lodge chef Sam Talbot stopped by, it was time for Harper to gear up for a few songs in honor of Arquette’s perfectly timed 37th birthday. “Don’t get me wrong,” grinned Arquette as he glanced around the room, “I love a good rhinestone jumpsuit, but this is about clothes that everybody can actually wear.”