For a fashion event in Milan, it doesn’t get much more impressive than the Casa Degli Atellani, a residence that houses Leonardo da Vinci’s “The Last Supper.” 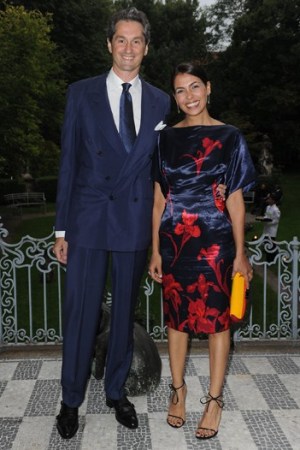 LAST SUPPER: For a fashion event in Milan, it doesn’t get much more impressive than the Casa Degli Atellani, a private residence located opposite the Santa Maria Delle Grazie, home to Leonardo da Vinci’s “The Last Supper.” Louis Vuitton hosted its own special dinner there Saturday night to honor Luchino Visconti di Modrone, ambassador of the house’s new made-to-order shoe service for men.

The luxury service will enter the brand’s renovated store on Via Montenapoleone on Sept. 23, followed by Shanghai and Sydney by the end of the year. Clients can compose their own shoe choosing from six different shoe styles, four soles, including a style boasting technically complex Norwegian stitching, three different types of instep and eight leathers, including ostrich and python. The customer can also choose to have initials or digits inscribed on the inside of the shoe. Sample designs were on show at the event.

André Saraiva, the graffiti artist and nightclub entrepreneur, said he’s due to present a short movie, sponsored by Weston, during Paris men’s fashion week on Wednesday. He’s also designed a new uniform for staff at his Le Bain nightclub at New York’s Standard hotel in collaboration with iconic French nautical clothing brand, Saint-James. Plus, as the newly tapped creative director of l’Officiel Hommes magazine, he’s working on the title’s September edition. “I didn’t realize what hard work it would be,” he sighed. The magazine’s new fashion director, Tom Guinness, also attended the dinner.

Director Gianluca Migliarotti said he’s just wrapped a documentary based on the Neapolitan tailoring tradition, titled “Master.” Visconti di Modrone said he recently hooked up with the director to make a documentary about his favorite Milanese barber, Franco Bompieri. “It’s an incredible place, it’s close to the Teatro alla Scala and has long served Milanese aristocracy and bourgeoisie, all of the artists who to the Scala go there,” said Visconti di Modrone, adding that he has just taken his nine-month-old son there for his first haircut.

SHOP TALK: Having just opened its first showroom on Milan’s Via Montenapoleone, luxury Italian tailoring brand Caruso may soon have its own retail digs, according to chief executive officer and co-owner Umberto Angeloni. “We hope to open to a store in Milan next year,” he said. The brand’s merchandising concept is already in place in the showroom, which boasts strawberry plants on its balcony, worn wooden planks to display garments, elegant shelving units and cabinets in poplar and fogged brass. Highlights from the spring collection, meanwhile, include striped summer suits, silk nylon jackets and updated take on the hunting jacket.

“I love Milan’s fashion, food and culture — everything’s so alive and full of energy,” enthused Joe Jonas, the 21-year-old American pop star who is off to Spain to continue a six-city European tour ahead of the September release of his first solo album “Fast Life.” Wall-shaking music — and male dancers on scaffolds — greeted guests including Neil Barrett and Missoni.

NEW AT CREW: Fiona Kotur is the latest designer tapped by J. Crew to create a capsule collection of handbags. Lauded for her innovative clutches, Kotur created two styles — the “Union” and the “Colony” — varying shapes of her signature, structured pieces. The $350 to $615 clutches — comprised of materials such as satin, gray flannel, snakeskin and shagreen — will be available in late July at the J. Crew Collection store in New York City and jcrew.com.

WEBB’S NEW DIGS: The doors of the new David Webb store at 942 Madison Avenue open today. The luxe company will sell its baubles in a 500-square-foot boutique and execs will be ensconced in airy 8,000-square-foot offices. Terry Richardson has shot the brand’s fall ad campaign with a little help from Carine Roitfeld. Alex Wiederin did the honors as creative director.

IF THE SHOE FITS: On Wednesday, auction house Bonhams will hold a fine books and manuscripts auction featuring documents by Albert Einstein, pochoir plates by Léon Bakst and a first edition of Roald Dahl’s “Charlie and the Chocolate Factory.” Nestled among that inventory is a jewel of a lot for foot fetishists, shoe designers and Imelda Marcos: the early 20th century archives of Munich scholar Karl Friedrich Schoensiegel, which include a slew of paintings, transparencies, manuscripts and research books, all shoe-related.

The highlight of the collection? 277 watercolors, all by Schoensiegel, which are divvied up by location and era. There are illustrations of ancient Chinese slippers, 15th century Venetian platforms, high heels from Damascus and Assyrian flats covered in amulets — not to mention plenty of riding boots, pumps and royal footwear. “The archival value is so great,” noted Bonhams specialist Christina Geiger. “The hope is that this goes to someone who could publish or exhibit it.” Also included in the lot, which is expected to fetch anywhere from $40,000 to $60,000: two pairs of vintage shoes from Bally and Saks Fifth Avenue as well as a smaller, more erotic collection of clippings. “Of course, by our standards,” added Geiger of the latter, “they’re reasonably tame.”

POWER OF TWO: Handbag line Carmina Campus, the ecological collection designed by Ilaria Venturini Fendi, has teamed up with fashionable Milan boutique 10 Corso Como for a capsule made with the store’s scrap fabrics, military blankets and sample color swatches of hides, all produced in Africa as part of the International Trade Center ethical fashion program.