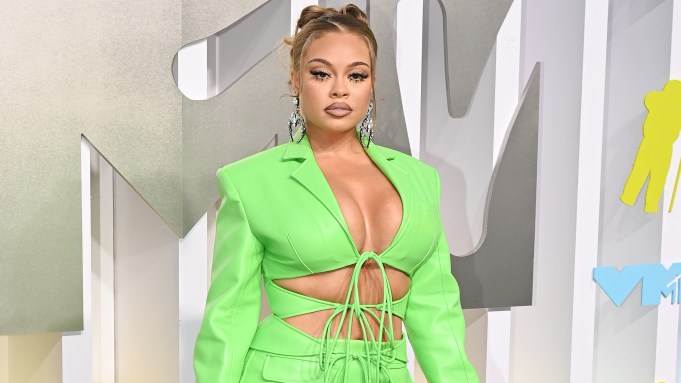 On Sunday, the rapper went fashion-forward on the red carpet, wearing a bright green set by Lado Bokuchava that featured a cropped blazer with a plunging neckline and cutout designs with a matching mini skirt. She paired the look with green block heels by The Attico.

She wore her hair in an updo and opted for a ‘90s-inspired makeup look, accessorizing with statement jewelry.

Latto was styled by Zerina Akers, who also works with the likes of Megan Thee Stallion, Karol G and Michaela Coel.

The rapper, who achieved mainstream success this year with her song “Big Energy,” was up for a number of awards Sunday night, including Best New Artist, Best Hip Hop and Song of the Summer.

She was tapped as one of the many presenters for the night, introducing popular Korean all-girl group Blackpink in their U.S. award show debut.

Later in the night she changed into a black edition suit with floral appliqué by Valentino and an embellished floor-length metallic gown with a high thigh slit.

At the 2022 BET Awards in June, Carey made a special appearance, joining Latto on the stage during her performance, singing her famous hit song “Fantasy” toward the end of the rapper’s segment.