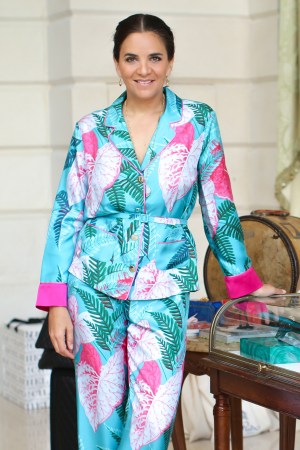 TEA OR COFFEE?: When it comes to breakfast fodder, choice is a very personal thing. But in the middle of couture week, many a guest were tempted by the array of delicacies on offer at the newly reopened Ritz Paris to celebrate the launch of The Webster’s pop-up at the storied hotel on Place Vendôme.

Laure Hériard Dubreuil is currently addicted to the pink granola that Maisie Café created especially for the store. “It’s my breakfast during couture,” she said. “I love it so much.”

Jewelry designer Yaz Bukey is also a cereal person — she makes her own muesli with ginger syrup, cashew nuts, coconut flakes and oats with soy or almond milk, but admitted that her morning accompaniments of “a long coffee and a cigarette” are less healthy.

Bukey was heading to New York later in the day to work on her upcoming collaboration with Zac Posen for Brooks Brothers. “I’m also starting to work on a license with Disney. My aim is to create Yazbubeyland,” she said.

Virginie Courtin-Clarins is a definite patriot when it comes to her breakfast choices, she said. “I love pain au chocolats and baguettes,” she said, but copped to one concession to healthy living — green tea, before running off to snap photos of the Ritz’s sunlit garden on her smartphone. “It’s the first time I’ve been back since it reopened, I have to take a snap,” she said.