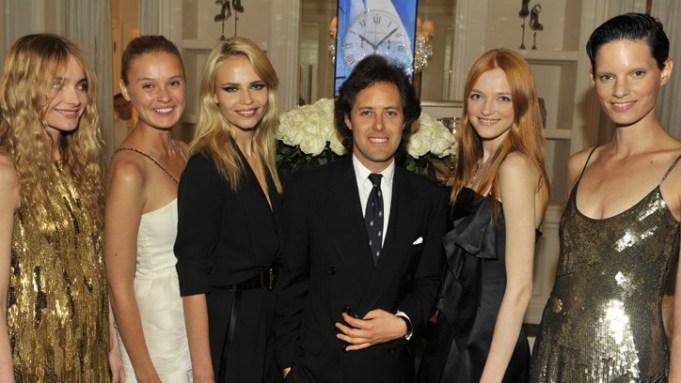 TIME ON THEIR HANDS: David Lauren wasn’t deterred by the difficult market for luxury goods at a launch party for Ralph Lauren’s new watch collection in Paris Wednesday night at the tail end of couture week. “It’s tough. Some people will want to wait,” he said, referring to some customers who have become increasingly hesitant to invest in expensive timepieces in the current downturn. “But we are here for the long run.” The U.S. fashion house is launching 23 high-end timepieces in collaboration with Swiss luxury group Compagnie Financière Richemont, with prices ranging from $10,000 to $80,000. So far, the Japan and U.K launches, which preceded France, have been encouraging, Lauren said, with several pieces sold in the first week after going on sale.

Dressed in a pale gray satin Ralph Lauren gown, French actress Elsa Zylberstein said she would play philosopher Hannah Arendt in a play set to open in Paris in September. But before going back to the stage, she’s taking time off work in New York, the south of France and Greece. “I haven’t been on holiday in a year,” she laughed.

SHOW REVIEW: The merits — and perils — of an overheated fashion week system have long been debated among the wandering fashion tribe. The industry will get its chance to vent about the issue at a “town hall” meeting at 9 a.m. on July 28 arranged by the Council of Fashion Designers of America and moderated by CFDA president Diane von Furstenberg. Executive director Steven Kolb sent out an e-mail Thursday asking people to attend this “very important” meeting. The shows and their relevance in the current iteration — from timing to their focus on trade versus consumers — are expected to be the subjects of discussion. The meeting will take place at the Fashion Institute of Technology’s Katie Murphy Amphitheatre and comes at a time when retailers are pushing for closer-to-season deliveries, the calendar is crunched, MAC cosmetics is looking to create a new group of shows at Milk Studios in New York and designers are questioning for whom exactly the shows are produced: retailers, consumers, press, TV, the Internet or all of the above.

SPACE INVADERS: One small step for man, one giant leap for leather goods. July 20 marks the 40th anniversary of Apollo 11’s first lunar landing, but to commemorate, Louis Vuitton has created a custom-order “Malle Mars” trunk designed with a trip to Mars in mind. The aerodynamic trunk, which looks like something out of “Star Trek,” opens up to unveil compartments for all kinds of space necessities — from tool and pharmaceuticals drawers to shelves for dishware and even a folding chair to take in the views of Earth.

The trunk, as well as other NASA photographs, space toys, sculptures and astronomy photos, will be on view this Monday, when Louis Vuitton is celebrating the lunar landing’s anniversary with a party at the Rose Center for Earth and Space at the American Museum of Natural History. Vuitton North America president and chief executive officer Daniel Lalonde is playing host with Buzz Aldrin, Jim Lovell and Sally Ride — the history-making astronauts who star in the company’s new core values campaign. For the occasion, Vuitton is donating an undisclosed sum to Al Gore’s Climate Project, and sales of the travel collection at the Fifth Avenue flagship from July 13 to 20 will benefit the organization.

As for Mars, the only thing that is missing now is for Marc Jacobs to design the special Louis Vuitton space suit.

COMFORT ZONE: If passion fruit cachaça cocktails and Brazil’s ambassador to France weren’t enough to get the fashion flock in the carnival spirit at Paris’ Galignani bookstore, then hostess Bethy Lagardère was. “Essentially, Brazilians are very similar to French, but perhaps with a little more Samba,” the Brazilian-born social doyenne quipped at an event to fete the year of France in Brazil. Lagardère also showed off FFW Mag!, a Brazilian fashion magazine, which published a special edition called “Passion Bethy Lagardère” in her honor. “It’s a homage of sorts,” she said before being bear-hugged by Peter Marino and welcoming guests including Alber Elbaz, Pierre Cardin and Giambattista Valli. “The best thing about Brazil is the people, the freedom and the comfort,” said Elbaz, who looked comfy himself in a pair of clogs.

MEN IN WAITING: Fendi is taking a break from its men’s wear collection, which skipped the spring-summer 2010 season with plans to relaunch for fall-winter. “We are taking a small pause,” said Silvia Venturini Fendi as she took her seat in Valentino’s front row Wednesday, adding that the Roman fashion house is studying a new formula for men’s. Fendi herself is the new owner of a Parisian pied-à-terre, which she described as “miniscule.”

Dasha Zhukova, meanwhile, said she’s hoping to wrap Pop magazine’s September issue by the end of the month. Is the new editor stressed about the relaunch? “Not at all,” she beamed. The Russian socialite is also gearing up for the Moscow opening of Antony Gormley’s Domain Field, an installation of 287 sculptures, molded from volunteers aged from two to 85 years old, which opens at her contemporary cultural center, The Garage, on July 16. As to widespread reports that billionaire boyfriend Roman Abramovich last month became the new owner of the “Eclipse,” the world’s largest and most expensive superyacht (fitted with two helipads, two swimming pools, a cinema and bulletproof glass), Zhukova demurred: “I don’t comment on my boyfriend.”

The Santo Domingo clan, including Lauren, Tatiana and Julio, were all headed to the Valentino after party where Julio was set to DJ.

“It’ll be a little bit of everything,” he said. “We’ll start with some good rock ’n’ roll and then we’ll end up with techno house.”

WANG’S WORLD: At the end of the month, Alexander Wang plans to unveil his debut men’s line. There is, however, a twist. When the designer announced he was entering the men’s category earlier this year, many assumed it would be for his main runway collection. Instead, the new men’s offerings will be part of his secondary T label, which he is evolving beyond T-shirt and tank basics for women as well.

Elsewhere at Wang, rumor has it there’s a new stylist on deck for his upcoming spring show: Karl Templer, who’s styled the runways for Calvin Klein, among others. Wang was unable to comment.

SHARON TATE REMEMBERED: In what one might view as a peculiar, if not a little weird or chill-inspiring tribute, the late actress Sharon Tate will be the subject of a multimedia art and fashion exhibit titled “ICON” at the High Profile Productions studio in Culver City, Calif. on Aug. 8. Commemorating the 40th anniversary of the actress’ murder by the Manson family and hosted by her sister Deborah Tate, “ICON” will feature a selection of Christian Dior, Yves Saint Laurent, Ossie Clark and Thea Porter clothing worn by Tate, which provided the inspiration for art by Jeremy Corbell, including satin prints, mixed media canvases and a Polaroid installation with original prints and negatives from a past Tate photo shoot.

TRUE ROMANCE: Love was in the air at Mulberry’s Rue Saint Honoré store on Wednesday night at a signing party for photographer Chris Craymer’s first book, “Romance.” Manning the decks, model Iekeliene Stange said she’s due to set off in her camper van for a summer tour of northern Scandinavia, where she’ll be photographing the region’s indigenous Sami people, otherwise known as reindeer people. “Their culture is disappearing as their land is being taken over by nature reserves,” she said, as guests including actresses Roxane Mesquida, Clémentine Poidatz and Fanny Valette munched Union Jack cupcakes and viewed 20 limited edition photos that were later auctioned in aid of Unicef.

Across town, Fifi Chachnil, Cameron Silver and Colette’s Sarah Lerfel joined Azzaro’s Vanessa Seward to toast her pre-spring collaboration with Florence Deygas and Olivier Kuntzel. The event took place in the artists’ atelier in the north of Paris. Coming next, illustrations by Deygas of Seward’s cat, Mr. Joe, will feature in Azzaro’s main spring line. Azzaro is said to be readying to open a store in London this fall, likely to be situated in or around Mount Street.