The 12,000-square-foot, two-story clubhouse and educational facility in Crotona Park is in memory of Leeds’ late son Cary, who died in 2003 at the age of 45. 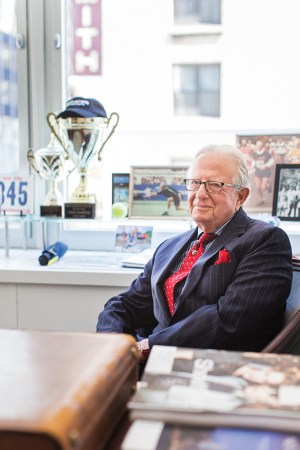 Laurence C. Leeds Jr. has realized a long-held dream in opening the Cary Leeds Center for Tennis & Learning in New York City’s South Bronx – and got a lot of help from his friends in the fashion world.

The 12,000-square-foot, two-story clubhouse and educational facility in Crotona Park is in memory of Leeds’ late son Cary, who died in 2003 at the age of 45. He was a world-ranked professional tennis player and Wimbledon mixed-doubles semifinalist. A Yale graduate, he played first singles for the university and, in later years, loved teaching the sport.

“This has been the crusade of my life — to give meaning to Cary’s life and make the world a better place because he was here,” said his father.

The facility, constructed in partnership with the NYC Department of Parks & Recreation and designed by GLUCK+, will offer young people and their families a range of after-school academic support, including tutoring, homework assistance, SAT and Regents test preparation, project- based learning and college readiness programs. It will also offer programs centered around healthy living and character education, in addition to professional tennis lessons. The year-round facility, in a 127-acre parkland setting, has two exhibition courts with spectator viewing for 1,000 as well as 20 additional tennis courts, including 10 indoor courts in a bubble.

The plan also includes hosting professional tennis tournaments, which would be played on the Victor Kiam Stadium Court and The Pershing Square Foundation exhibition court, which offer seating for 1,000 spectators.

The facility will also house the Billie Jean King Clubhouse of the Women’s Sports Foundation, which will provide annual funding to the New York Junior Tennis & Learning for its “get active” GoGirlGo! Curriculum. There are 2,500 girls enrolled in the program.

According to Deborah MacFarlane Antoine, president and chief executive officer of the New York Junior Tennis & Learning, there are five middle and elementary schools within walking distance of the Cary Leeds center, and the center will directly service 38 schools around the city.

NYJTL was founded in 1971 by Lewis “Skip” Hartman and Arthur Ashe, and today is the largest nonprofit youth tennis and educational program in the U.S. The NYJTL reaches 65,000 children each year. “It’s a great economic boost to the Bronx and great way to showcase this beautiful borough to the world,” she said.

“It’s a big deal,” Leeds said. “It’s the biggest thing in the Bronx after Yankee Stadium.”