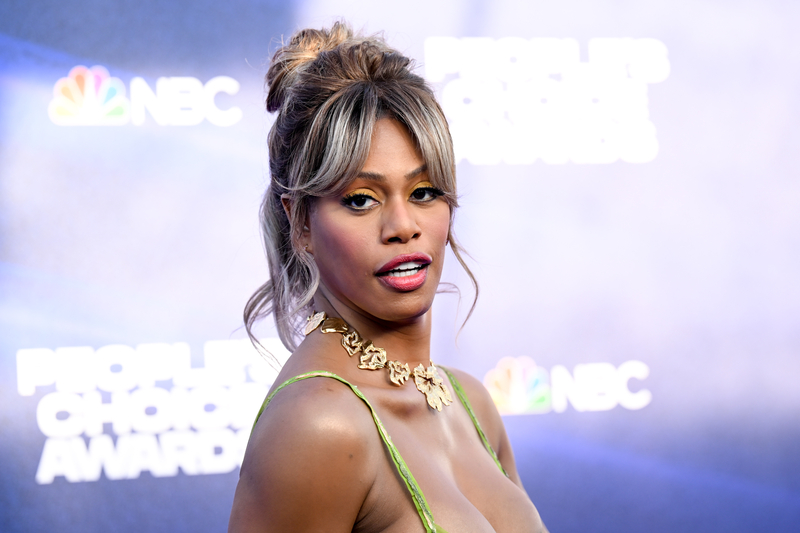 Laverne Cox arrived at the 2022 People’s Choice Awards in Los Angeles strutting in a striking ensemble on Tuesday night. For the event, in which Cox hosted the “E! Live From the Red Carpet” segment, she wore the Olive Butterfly Princess dress from Collina Strada‘s summer 2022 ready-to-wear collection.

The botanical green look featured an emerald structured corset top and a gold pannier-like structure at the hips, creating a dramatic princess effect.

When it came to accessories, Cox was donned in a shimmering statement necklace and wore a pair of sparkly earrings. For shoes, she slipped into a pair of gold pointed-toe stiletto pumps.

For her hair, the actress exuded glamour in a high updo with front bangs. Her makeup look was in alignment with her nature theme, wearing pigmented yellow eye shadow, peach blush and a matte rose lip.

The E! reporter continues to venture more into the fashion and entertainment industry. The actress, who starred in the popular 2022 Netflix drama series “Inventing Anna,” just attended her first Paris Couture Week in January. Her outfits for the weeklong fashion event included a sculpture-turned-headpiece, a sheer black gown and a crystal headpiece. In February, Cox also hosted the red carpet segment of the SAG Awards.

The People’s Choice Awards is an annual awards show where fans honor a year of outstanding pop culture entertainment, ranging from TV, film, acting and music, with winners chosen by the public. This year’s award show was hosted by comedian Kenan Thompson and awarded Lizzo as the People’s Champion Award and Ryan Reynolds with the People’s Icon award.