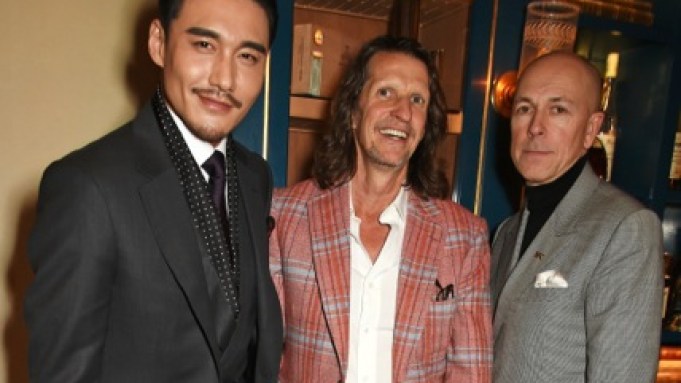 ROW AND BEHOLD: Praise for Savile Row’s cutters reached hyperbolic proportions on Friday night at the cocktail party cohosted by Woolmark and Pierre Lagrange, chairman of Huntsman and former chairman of the Savile Row Bespoke Association during London Collections: Men.

“Will Adams is like God,” said Dermot O’Leary, describing the head cutter at Hardy Amies. “He loves that double-breasted look, and I haven’t had a double-breasted suit for ages. Also, I don’t have a lighter suit, which I know in winter can wash you out a little bit — but what the hell!”

O’Leary was celebrating his new threads at The Ambassador’s Project in London, a collaboration conceived by Lagrange between member houses of the Savile Row Bespoke Association and Woolmark. The latter created bespoke merino wool suits with help from London Collections: Men ambassadors Tinie Tempah, David Gandy, Hu Bing and chair Dylan Jones. The event was held at Mark’s Club in Mayfair on Friday night.

Gandy channeled his love of fast cars into his windowpane check three-piece suit by Henry Poole. The lining was printed with tiny vintage Jaguar cars he designed himself. “It’s a little bit geeky, but I drive classic Jaguars and it’s a one-off, which is what I love about bespoke suits,” he said. “It’s only yours.”

Meanwhile, Chinese star Bing worked with Huntsman on his suit, which featured his initials subtly embroidered alongside a monkey — a nod to the coming Chinese New Year.

Actor Christian Cooke swung into the party late to collect his former agent and current Hollywood style consultant Andrew Weitz for dinner and a catch-up.

Cooke, who is currently starring in “The Art Of More” on Sony’s Crackle TV platform, is back in the U.K. to make his directorial debut in a short film called “Edith” starring “Game of Thrones” actress Michelle Fairley and Scottish actor Peter Mullan.

“It’s about grief, really,” he told WWD. “It’s a somber story about a guy trying to get over the death of his wife. I haven’t felt this excited about a project in a long time. I’ve got some really good ideas for ways of bringing it off the page.” Cooke said he plans to submit the film to the Cannes and Sundance film festivals.

Model Oliver Cheshire, just back from a Christmas ski trip to Verbier, Switzerland with girlfriend Pixie Lott, where there was “no snow, so a lot of booze,” was in deep conversation with his hair stylist Larry King, plotting a new look.

“We’re keeping the details schtum,” said King, “but picture a Seventies megastar. Basically, Cheshire is going to have the men’s haircut to have in about three month’s time.”