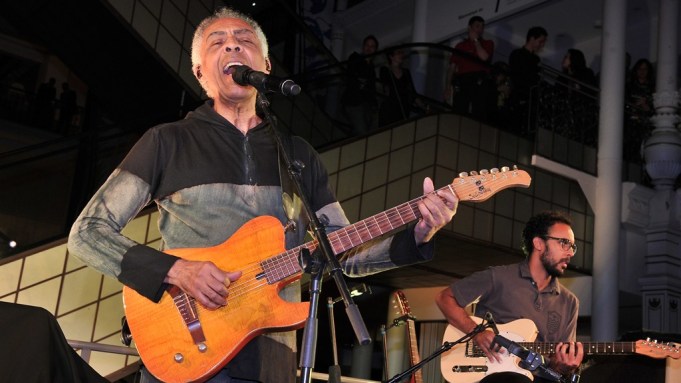 TUDO BEM: Le Bon Marché was swinging to a samba beat Monday night as the temple of Left Bank chic celebrated its festival of Brazilian culture with a concert by music legend Gilberto Gil.

A sizeable Brazilian contingent turned out for the launch of “Le Brésil Rive Gauche,” which runs at the Paris department store until June 22. The event features 120 Brazilian brands spanning from ready-to-wear to home wares, in addition to window displays, culinary demonstrations, a photo exhibit and a video installation.

“Being surrounded by my people is a delight, and especially being able to speak my language with a Brazilian accent,” beamed Paris-based designer Gustavo Lins, as waiters proffered caipirinha cocktails and pão de queijo rolls. Though he left 26 years ago, Lins confessed he still has one foot in his home country.

Kelly Amorim, chief executive officer of jewelry brand Carla Amorim, noted it was the first time the line, whose fans include U.S. First Lady Michelle Obama, was available in France.

“It’s an honor to be here, but it’s natural for Brazil to show the full breadth of its talents,” she said. “Brazil has become a player — clearly a fledgling player, a newcomer with a long road ahead. It’s up to us to be professional. We have beautiful products, now we need to work hard, deliver and distribute them.”

But the highlight of the evening was Gil’s performance, which featured original songs alongside covers of the Bob Marley classics “No Woman, No Cry” and “Three Little Birds.” The crowd went wild for his hit “Aquele Abraço,” singing along and dancing the samba among the beauty counters on the store’s ground floor.

“The French have always had a soft spot for Brazilian music. It’s part of a tradition of cultural exchange that stretches way back to the era of monarchic rule,” Gil told WWD. “France has always appreciated Brazilian qualities and expressed concern for the issues facing Brazilian indigenous communities.”

The latter point is of special significance to Gil, whose visit to Paris coincided with a preview screening of “Viramundo,” a documentary in which he explores the links between Amazonian Indians, South Africans and Australian Aborigines through encounters with various musicians.

Since stepping down as Brazil’s culture minister in 2008, Gil has remained a vocal proponent of human rights and environmental causes, though these days, he sees himself mainly as a musician. His next project is recording an album of samba songs that he hopes to release by year-end.