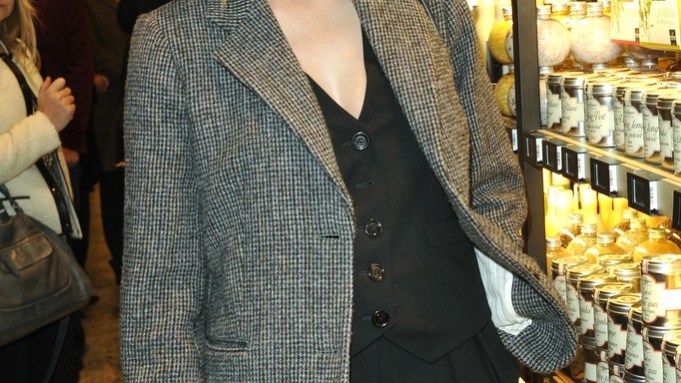 Diane Kruger, whose Paris apartment is nearby, wandered the aisles checking out delicacies like edible scorpions encased in toffee. “I could spend hours in this space, which I actually do, to be honest with you. I buy all my Christmas food here,” said the German actress, who draws inspiration from her mother’s holiday menu.

“Usually it’s goose or duck in Germany, and then red cabbage and Klösse, which is like these potato dumplings which nobody except for me, outside of Germany, really likes — but I make it anyway,” she said.

Kruger was enjoying a European break ahead of the release next year of “The Better Angels,” a black-and-white film about Abraham Lincoln’s formative years, in which she plays the American president’s stepmother, Sarah Lincoln.

As guests drank Ruinart Champagne and plowed their way through mountains of food, the store’s staff descended new escalators in the center of the hall to the live strains of Ravel’s “Bolero.” On the shoulders of their work blouses were symbols of their trade — grapes, sausages and lobsters included.

With a total surface of close to 38,000 square feet, La Grande Epicerie stocks 30,000 references, including 60 varieties of bread, 2,000 wines and more than 140 kinds of cheese. From today, it will also boast a 125-seat restaurant, La Table de la Grande Epicerie de Paris, set on a platform overlooking the shop floor.

Patrice Wagner, chairman and chief executive officer of Le Bon Marché, thanked customers for putting up with the lengthy renovations. “For the last 18 months, they have stuck by us despite the dust and the work, which is pretty exceptional,” he said.

Valérie Bonneton, who stars on the hit French television series “Fais pas ci, fais pas ça” (“Don’t Do This, Don’t Do That” in English), said she keeps coming back to the store, though her local popularity means she regularly gets accosted by fans.

As if on cue, a young woman materialized in the condiments aisle. “Excuse me, I just want to tell you that I adore you,” she blurted out, to the obvious delight of the French actress. “Yes, it happens quite a lot. It is very, very nice,” beamed Bonneton.