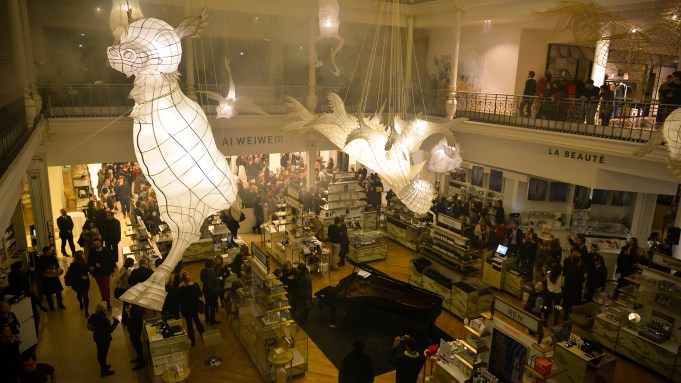 SELFIE OP: Fans rushed to take selfies with Chinese artist and activist Ai Weiwei at Le Bon Marché on Monday night. The occasion was the opening of his exhibition, entitled “Er Xi” — or “Child’s Play” — at the Paris department store, which marks his first show in a retail space.

Blanca Li, Gildas Loaëc, Jean-Philippe Delhomme, Nicolas Ouchenir, Hugo Matha and Chantal Gaemperle were among those who turned up to see the display of whimsical kites evoking feathered dragons. On Sunday evening, a contemporary art crowd plus Paris Hilton joined Bernard Arnault to celebrate the exhibit. Ai, for his part, took a selfie with the chief of LVMH Moët Hennessy Louis Vuitton, owner of Le Bon Marché.

“To be in Paris is like a dream,” Ai told WWD on Monday.

On why he chose Le Bon Marché for his first show in Paris since 2005, he simply answered: “No museum has asked me. Le Bon Marché has invited me.”

It’s meaningful for Ai to be in Paris at a time when the city is rebounding.

“Art is always the best way for healing,” he said.

During Ai’s five-day trip, the artist — who has been based in Berlin since China lifted its travel ban on him earlier this year — visited the Louis Vuitton Foundation, where one of his art piece — a tree sculpture — will be displayed starting Jan. 27. It is rumored that one kite now showcased at the department store will likely join the foundation’s collection, too. But when contacted by WWD, a spokeswoman for the foundation declined to comment, saying the museum does not typically communicate on acquisitions.

“It’s the first time we’re dedicating so much space to a single artist — the store’s windows, the atrium, the gallery space and the selfie wall,” said Le Bon Marché art director Frédéric Bodenes.

“I don’t want to bother him to take a selfie,” said Delhomme, referring to Ai. Instead, the illustrator behind The Unknown Hipster is plotting a sketch of his popular character taking a selfie with Ai.

He also made around 20 illustrations for Maison Kitsuné’s music project, called Kitsuné Hot Stream. An exhibition of the drawings is to open at the label’s store on Boulevard des Filles du Calvaire in Paris on Wednesday.