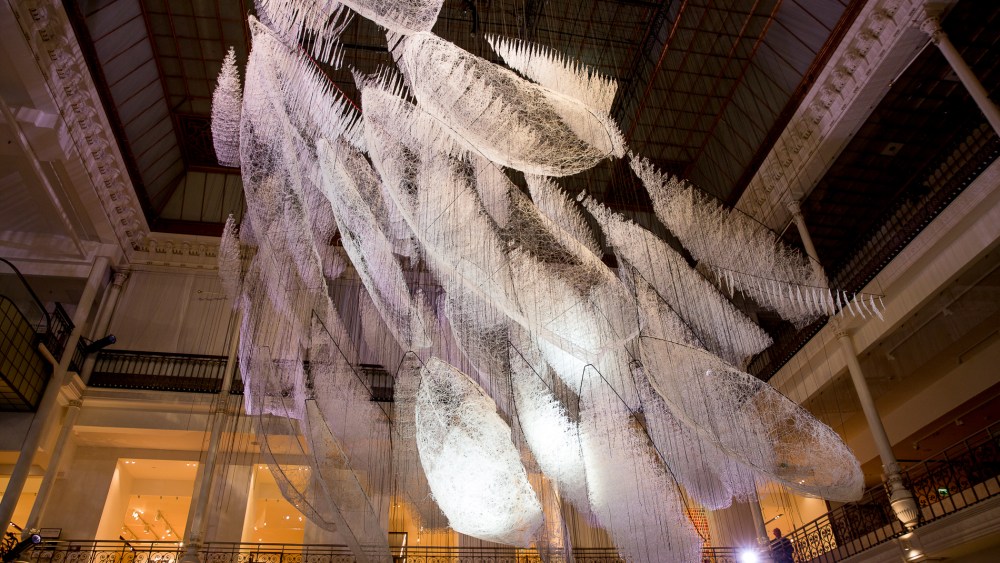 PARIS — “It’s pure poetry. They look like angel’s wings,” said Daniel Templon, looking up in awe at the sculptural arcs of white thread stretched over the ground floor of Le Bon Marché.

The Paris department store celebrated the launch of an in-store exhibition by Chiharu Shiota on Sunday night, for which the Japanese artist had spun around 300,000 yards of white thread.

In addition to the wavelike sculptures stretched over a portion of the ground floor, the show titled “Where are We Going?” featured constellations of 150 weblike ships suspended over the department store’s soaring atrium and 10 window displays interspersing the white threads with ancient maps — a “celestial navigation,” according to Templon.

The galerist represents Shiota and is known for introducing major contemporary artists, including Jean-Michel Basquiat and Keith Haring, to France.

An exhibition by the artist and activist Ai Weiwei last winter had set the bar high.

“That exhibition had a worldwide effect. It was an enormous surprise,” said Patrice Wagner, chairman and chief executive officer of the LVMH-owned department store. The Ai Weiwei exhibition raised the store’s profile in the international press and boosted store traffic substantially.

“Sometimes we had 10 times the usual traffic during Ai Weiwei,” Wagner said. “Business isn’t the only goal. We want to fascinate our clients, to show them something out of the ordinary.”

Guests snacked on sushi and soup as they wandered through the cotton sculptures — whose white color made reference to Le Bon Marché’s traditional January linen sales and was a departure from Shiota’s usual palette of red and black.

French actors including Karin Viard, Ana Girardot and Raphaël Personnaz turned out for the event. The designer Kenzo Takada was also spotted making a quick visit.

“It’s perfect for a Sunday night,” said Personnaz, who added that he was recovering from a somewhat rowdy dinner party with friends the night before. The actor has appeared in more than 50 films and is preparing a stage adaptation of Ingmar Bergman’s “Scenes From a Marriage” that will open in February at Paris’ Théatre de l’Oeuvre.

For Templon, fashion and art will continue to cultivate close ties, as such collaborations are often mutually beneficial.

“These two milieux have always been rubbing up against each other,” Templon said. “A large event like this introduces the artist to a different audience and contributes enormously to raising their profile.”

The exhibit will remain in place through Feb. 18.