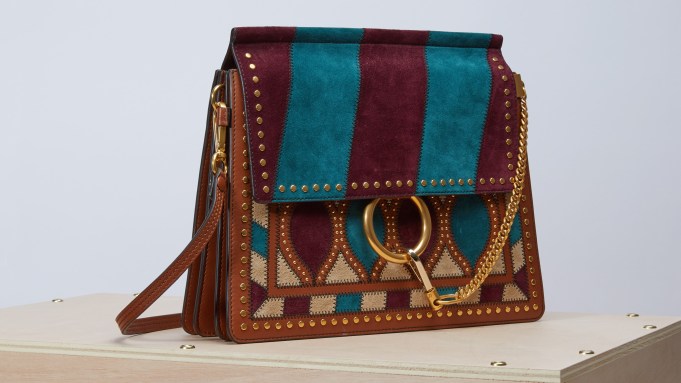 LIVE FROM THE LEFT BANK: Le Bon Marché celebrated its new global site 24 Sèvres on Tuesday with the unveiling of a capsule collection of 77 limited-edition pieces designed by 68 local and international brands including Chloé, Miu Miu, Fendi, Givenchy and Proenza Schouler.

The Paris department store encouraged collaborations, resulting in items including a Loewe Hammock bag created with graphic design duo M/M Paris, a Kenzo sweatshirt featuring a Hans Feurer photograph of model Iman in a 1983 look from the brand and a Marc Jacobs denim jacked created with illustrator Julie Verhoeven.

Prices range from 75 euros, or $85, for a Casanera scent diffuser with a fragrance developed by musician Thomas Dutronc, to 5,400 euros, or $6,090, for a cashmere cape from Loro Piana.

The pieces were exhibited on the ground floor of Le Bon Marché, which also featured special window displays. A dedicated exhibition space allowed customers to discover the site on tablets, while a new “click and collect” department permitted them to place and pick up their online orders.

The architects of the site, owned and managed by LVMH Moët Hennessy Louis Vuitton, identified an opening for fashion with a distinctly Parisian point of view that has been missing from digital and e-commerce.

Le Bon Marché, which for more than 160 years has been located at 24 Rue de Sèvres, is known for its edit that mixes well-known brands with emerging designers. The new web site is the only place that some brands within the LVMH fold, such as Louis Vuitton and Dior, will be sold by a multibrand online store.

It aims to adapt online shopping to the Internet as a visual medium. Through collaborations with artists and innovators, 24 Sèvres will apply a cultural twist to fashion, with daily content across all digital platforms, from social media to the site, and in-app exclusives.