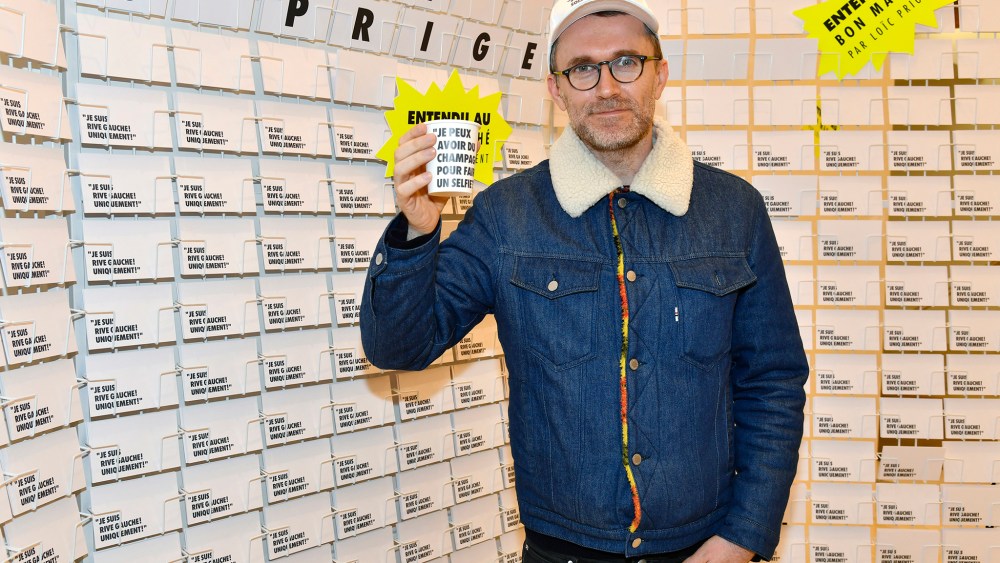 WITTICISMS: The “Heard at Le Bon Marché” exhibition — for which French filmmaker Loïc Prigent collected quotes and quips from customers — was celebrated Tuesday night at the Paris department store.

“I want to steal everything” and “I missed Saint Laurent to come here” were among the tidbits circulating. While reading entertaining phrases or coming up with their own new ones, guests snacked on Breton fare paired with sparkling cider. But that’s not what the director of the “The Day Before” fashion documentary series will remember most. Rather, it’s “the look on fashion people’s faces when they hear the Breton bagpipes. Priceless,” he said.

“My only social call is at Le Bon Marché,” joked leather designer Aurelia Stouls as she looked around at the pop-up store filled with the all-white items emblazoned in bold black letters. It is set to remain open until April 2.

Longtime friend Gildas Loaëc, of Kitsuné, recalled Prigent’s long-standing obsession with eavesdropped bon mots. “Before Twitter, he would send them by post, and we created a fanzine in which he wrote what we overheard at parties,” said Loaëc.

Mademoiselle Agnès and designer Hugo Matha were spotted browsing through postcards for the best one-liners, while prima ballerina and choreographer Marie-Agnès Gillot alternated between perching on a counter and trying to record her first Instagram story.

“Fashion with a bit of humor is always a winning combination,” said Nadine Ghosn, the irreverent Manhattan-based jewelry designer behind Beyoncé’s “shut up” earrings. She recently held a pop-up event in the Le Bon Marché, as well.

“We come from the same village in Brittany, so we wanted to tip our hats to the region,” revealed Frédéric Bodenes, artistic director of the department store, referring to Prigent. “I found it funny to ask Loïc to eavesdrop in store and transcribe it into goodies. It’s a way of honoring our clients and also poking fun at ourselves.”

Inès de la Fressange, who has collaborated with Prigent on films for Roger Vivier, lauded the filmmaker’s knack for humor. “Loïc is brilliant. This is the very definition of a great idea. The concept is so simple, yet has never been done. I have no doubt American department stores will come calling, and I bet the first bag will read ‘OMG,’” she said.

Le Bon Marché chief executive officer Patrice Wagner, sporting a “You’re right. — Always.” T-shirt, explained the goal of the exhibition. “It’s important to lighten the mood in retail. Customers don’t want to be weighed down, they want a pleasurable, uplifting experience,” he said.

Asked if any of his own words had been overheard by Prigent, Wagner replied, amused: “Not in store. In my office, it would have been a different story.”